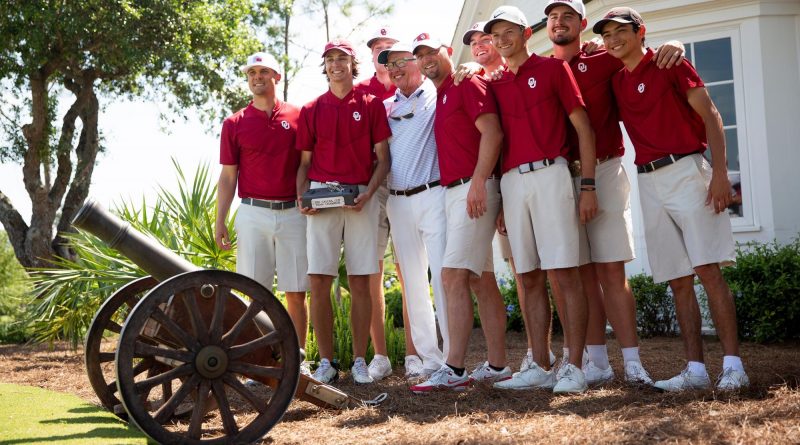 NAPLES, Fla. – The second-ranked Oklahoma men’s golf team held off a late charge from No. 1 Florida State and Georgia Tech to win the inaugural Calusa Cup by eight strokes on Tuesday. The Sooners (-5, 859) were the only team under-par at the par-72 Calusa Pines Golf Club, led by three golfers inside the top 10, including Logan McAllister who finished as the runner-up after consecutive rounds of 4-under 68

The win marked the team’s third of the season, tied for second-most in a single season in program history and it’s Ryan Hybl’s 28th win as head coach. McAllister’s runner-up finish, paired with a trio of OU All-Americans inside the top 15, was enough to extend the final-round lead and beat a field that featured the nation’s top three teams and two more ranked inside the top 15 nationally.

“Extremely proud of how our guys competed all week,” Hybl said after the win. “Finishing off the Calusa Cup with the low-final round continues to build our confidence. The best part is that everyone contributed in a major way this week, and it gave us a great win on a difficult golf course.”

McAllister (-4, 2nd) was the field’s best golfer over the final 36 holes and finished one stroke behind PGA Tour U No. 1 John Pak (FSU). The junior was the only golfer at Calusa Pines to card two rounds in the 60s and now owns a pair of runner-up finishes and victories in his last 10 events. McAllister opened his tournament with a 5-over on Sunday’s front nine before sinking a field-high 17 birdies over the final 45 holes, which he played 9-under.

“I started off horrible on Sunday on the front nine and just tried to push the reset button and forget about those holes and pretend it was a new tournament,” McAllister said. “I was trying to guide the ball because the areas into the greens are so tight, but coach just told me to make aggressive golf swings, and it really paid off over the last 45 holes.”

The Oklahoma City product has given Sooner fans a glimpse into what the future of Oklahoma golf could look like after the 2021 season comes to a close. McAllister has climbed as high as No. 7 in the national rankings and entered the week 29th in the Sagarin rankings.

“It cannot be overstated how important it is just to see good golf,” McAllister added. “Confidence can’t happen without seeing results, so to keep being there as a team and for all of us to keep playing well individually will be a huge help to us as we start to gear up for a postseason run. Hopefully, we can peak at the right time around the end of May.”

Brightwell (-1, T5) continued his stretch of spring dominance in Florida by earning a fifth-place finish, his fourth consecutive top 10 and his sixth in eight appearances for OU. His 38 pars led the Sooners and were suitable for sixth-most in the field as the redshirt senior looks to continue his ascension in the PGA Tour U rankings.

“I’ve been in a really good spot with every part of my game over the past month to where I’ve had consistent scores,” Brightwell said. “Nothing is really holding me back, and I feel like I’ve just done a nice job at taking what the course is giving me, which allows me to stay patient and do the best I can with what’s in front of me.”

The redshirt senior entered the week ranked 21st in the PGA Tour U rankings, just six places outside of the top 15 and guaranteed status on a professional tour once he leaves Norman. The Sooners are the nation’s only team with three golfers inside the top 25 with No. 2 Reband and No. 10 Quade Cummins joining Brightwell.

“To climb inside the top 15 would be great,” Brightwell said. “That’s the goal – to have some starts and a summer schedule to start my professional career.”

Quade Cummins (E, T9) compiled his best tournament of the month, finishing in a tie for ninth after firing three consecutive even-par rounds. The No. 10-ranked player in the PGA Tour U rankings, Cummins grabbed the first top-10 finish of his spring and 18th of his career.

Fellow All-American Garett Reband (+2, T14) shot a 2-under 70 in the final round, including a birdie on the 18th green to solidify a top-15 finish. The T14 placement extended his top-15 finishing streak to the last 13 54-hole events, stretched out over two years. His 2-under 70 on Tuesday was the second-lowest round for the Crimson and Cream, behind McAllister’s 68 (-4).

In his lineup debut, freshman Ben Lorenz finished T34 at 11-over but showed the type of player he will be for the Sooners over the next four seasons, firing a 71 (-1) in the tournament’s second round to help deliver the 36-hole lead on Monday afternoon.

A quick turnaround awaits the Sooners, who are set to tee off on Friday at the Aggie Invitational in College Station, Texas, to conclude the regular season.