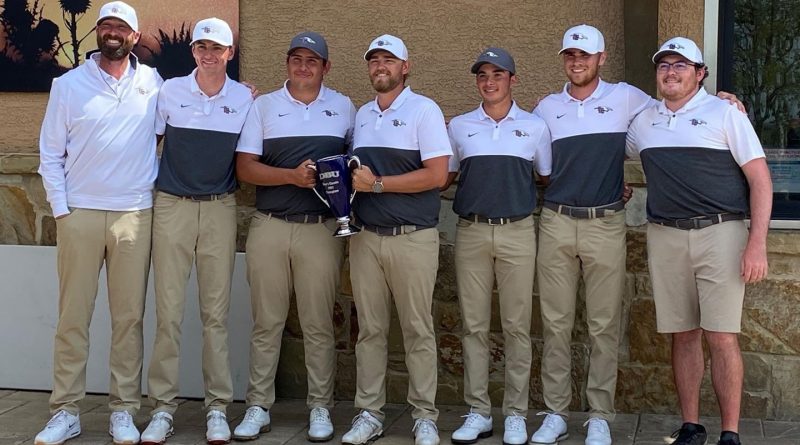 DENTON, Texas (April 6, 2021) – It wasn’t necessarily a thing of beauty coming down the stretch, but No. 19-ranked Oklahoma Christian overcame its late struggles to hang on for a two-shot win Tuesday in the Dallas Baptist Patriot Classic at Wildhorse Golf Club at Robson Ranch.

The win was the fourth of the 2021-season for the Eagles – who are hoping to be atop the NCAA’s South Central Region order of ranking when it will be announced on Friday – and the 72nd in the program’s overall history. OC improved its record this season against NCAA Division II competition to 73-5-2.

The Eagles’ final-round team score of 295 put them at 862 (2-under-par) for the three-round tournament, just ahead of fast-closing St. Mary’s (Texas) and Texas A&M-Commerce, which both finished at 864. A fourth Lone Star Conference team, Midwestern State (Texas), was well back in fourth at 878.

In a 98-man field made more difficult by the presence of 12 Division I players who competed as individuals, OC’s top players fared well. Two of them – Trevor Norby and Mateo Pulcini – remained in contention for an individual win until the closing holes before finishing tied for second and tied for sixth, respectively, while a third, Andres Brictson, tied for 12th. All three finished under par for the tournament.

OC began the day with a five-shot lead over St. Mary’s and a 13-shot advantage over TAMUC and never was headed, although there were some concerning moments. St. Mary’s closed within three shots near the midway point of the round before the Eagles extended that margin to 10. That cushion proved necessary.

Norby, a senior from Carlsbad, Calif., was 4-under for the round and 10-under for the tournament – two shots clear of the field – when he posted a triple bogey on the par-4 No. 15. That opened the door for Ryan Dixon of St. Mary’s, who parred his last four holes to finish at 7-under 209. Norby was at 7-under, too, before a bogey at the par-5 No. 17 put him behind Dixon.

With his even-par 72, Norby ended up tied with three Texas Tech golfers – Marcus Braddlie, Carl Didrik Meen Fosaas and J.P. Roller of Jenks – for second place at 210. It was the third straight tournament in which Norby finished either first or second.

Pulcini, a freshman from Rio Cuarto, Argentina, who shared the second-round lead with Roller, had three birdies and five bogeys in a roller-coaster round of 74 and ended up a shot behind Norby at 211 (5-under).

By the time the Eagles reached No. 18, their lead had shrunk to only three shots over St. Mary’s and TAMUC, but they played their final hole in 1-over-par to secure the team win.

Two freshmen from Edmond, Okla., who started for OC – Ransen Turner and Said Powers – tied for 60th and 80th, respectively. Turner shot an 80 to finish at 229, while Powers had a final-round 77 and an overall score of 235. Playing as an individual, OC sophomore Hunter Perkins of nearby Fort Worth, Texas, shot an 82 and finished at 253.

OC now will turn its attention to preparations for the LSC Championship tournament, which is scheduled for April 19-21 at Tierra Verde Golf Club in Arlington, Texas.