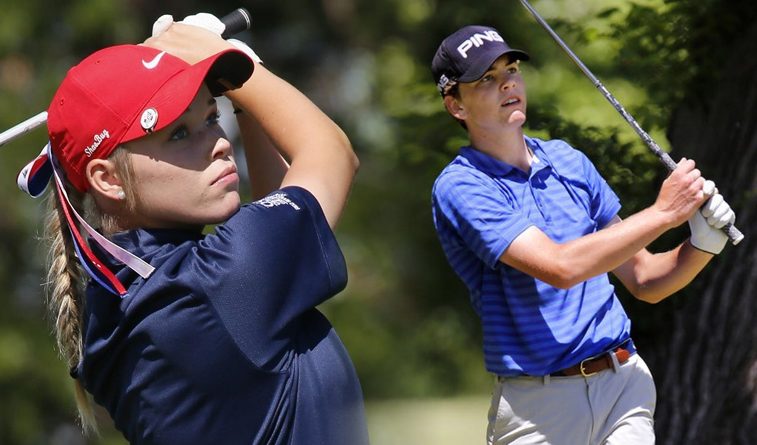 Logan McAllister, the two-time Class 3A champion from Christian Heritage in Oklahoma City, joined the defending national champion Oklahoma Sooners when he signed Wednesday morning. McAllister is one of the nation’s top juniors and “probably the biggest signee we’ve had since Brad Dalke,” according to OU coach Ryan Hybl.

Meanwhile, ShaeLee “ShaeBug” Scarberry of Purcell followed through on her verbal commitment to the University of Tulsa and will help coach Emilee Klein-Gille in her quest to rebuild the once powerful program that has been in the doldrums of late. Tulsa had started to rebound in the spring of 2017 but was rocked when top young player Greta Bruner transferred to TCU soon after winning the Dale McNamara Invitational last spring, the first victory by a TU golfers since 2013.

McAllister and Scarberry are just two of up to 28 golfers from the Oklahoma Junior Golf Tour ranks who may sign with colleges and universities over the next few days, according to OJGT executive director Morri Rose.

Combined with a top international player who was expected to sign by Thursday morning, Klein-Gille said this is her best recruiting class and should help TU instantly make a huge upgrade when the two become eligible in the fall of 2018.

“It’s a really exciting class and ShaeBug is a big part of it,” Klein-Gille said. “I see her potential as huge. I’ll never forget the first time I saw her play. I went out to South Lakes to watch Taylor Dobson and there was this little ninth grader behind me hitting the ball great. I started following her everywhere.”

Scarberry, like McAllister, is a two-time Class 3A state champion and will be an overwhelming favorite to win her third this spring. A freak hand injury suffered when she was hit by a ball on the driving range was a factor in her finishing second as a junior.

Scarberry won the Women’s Oklahoma Junior Championship for the second time this summer and finished second to Yujeong Son of Norman in the Oklahoma Golf Association Girls Junior Championship when Son was seven-under through the first 12 holes in the championship match. Scarberry showed she could win on the national level when she won an AJGA event at Oak Tree Country Club in 2016. Ironically McAllister won the boys division in that same event.

McAllister only added to his reputation for being able to post ridiculously low scores during his senior year. He shot a second-round 62 in the state high school finals, and a record-shattering 63 at TPC Sawgrass in the second round of the AJGA Players’ Championship in early September, an event in which he tied for second after losing in a playoff. He qualified for both the U.S. Junior Amateur and the PGA Junior, finishing ninth in the Stroke Play portion of the U.S. Junior Amateur and losing to Oklahoma State commit Matthew Wolff in the round of 16 when Wolff made a remarkable comeback in the final two holes.

McAllister shot a 59 to win the junior club championship at Belmar Country Club in Norman last year and doesn’t get tentative when he starts to get below par.

“He plays out at Belmar every day and his mindset is to go as low as he can every day,” Hybl said. “He hits it well enough and putts well enough that when he’s on he really gets it going.

“He’s a big guy and really just now growing into his body. He hits it a long way and has a good solid short game. He’s been competing very successfully at the highest level and is arguably the best recruit we’ve had since Brad.”

Hybl said he first came to really appreciate McAllister when he watched him late in a qualifier for the U.S. Amateur at Karsten Creek. “He shot a 91 in the first round but looked like he had shot a 69. He was focused and grinding all the way through. It was right after that he started seeing some serious growth in his golf game.”

McAllister lost in the final match of his final OGA Junior Championship last spring at Kickingbird Golf Course to Lane Wallace, who is now a freshman at OU and played in two events this fall as an individual. The two should both by vying to be starters by the fall of 2018.

Scarberry is known for her flamboyant outfits which include long colorful socks. Asked if she would be changing the TU wardrobe to accommodate her new player, Klein-Gille said she would definitely be buying her some socks in TU colors.

“It’s a case of look good, feel good, play good,” said Klein-Gille, who was hired in 2014. “ShaeBug is a very accurate player. She knows how to go low. When she’s hitting the ball well, no one hits it better. She is working hard on her putting because everybody can improve on their putting.

“It’s a matter of getting in here and learning how to win at that level. She won on the local level, in the OJGT, then at the AJGA level and she’ll win in college. It will prepare her for her goal of playing on the LPGA Tour.”

Scarberry won 16 tournaments over the past two years. Among her victories were wins at the 2017 U.S. Girls’ Junior Qualifier, 2017 WOGA Girls’ Jr. State Championship, 2017 OJGT Tour Championship at Dornick Hills CC in Ardmore, the 2016 and 2017 Kickingbird Fall Classic and the 2016 Oklahoma Junior Championship Match Play Tournament.

Scarberry also won consecutive Texas-Oklahoma Junior Girls’ Open Championships in 2016 and 2017. In the 2017 T-O Open Championship, Scarberry had a great finishing kick as she birdied four of the final seven holes, twice putting for an eagle (Nos. 15 and 16), to shoot a round of 1-over 72, taking the title by three strokes. As a 15-year old, she won 9 of 10 tournaments in the South Central Section of PGA Junior Golf 14-15 Tour.

Note: Many more top Oklahoma players who have committed to universities have signed or will be signing this week. Check back soon at www.golfoklahoma.org for a complete list of area signees.