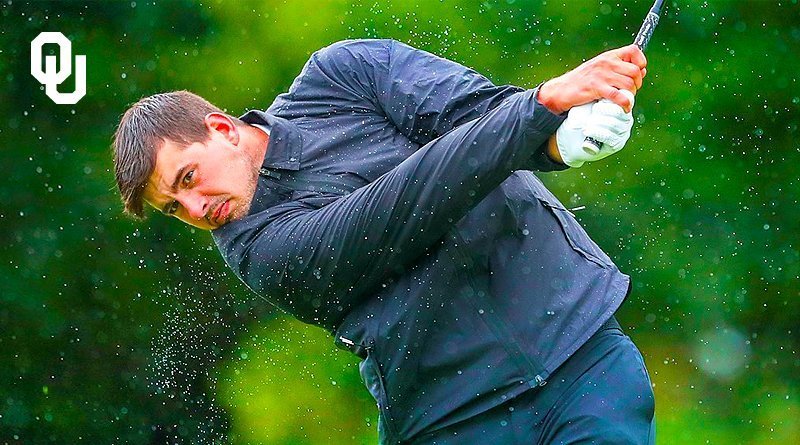 NORTH PLAINS, Ore. – The Oklahoma Sooners finished the second round of the Nike Golf Collegiate Invitational at Pumpkin Ridge Golf Club with a 17-under 267,  tying the lowest round score in school history, moving to 31-under for 36 holes and opening up a 15-stroke lead over Wake Forest heading into today’s final round.

“After a very solid first round, our talk last night was about getting even more from the course because we know it’s out there and our guys did that today,” OU head coach Ryan Hybl said. “This group is hungry and they are doing some great things right now.  Tomorrow is a new day and our mindset won’t change, the goal will be to keep the pedal down and see how low we can go.”

Sophomore Logan McAllister leads the field at 10-under 132 after a second round of 4-under 67.  McAllister had five birdies, including four on the back nine.

Senior Garett Reband is tied for second place after firing a 66 on Monday to push his 36-hole total to 133. Reband started out the day with two birdies on the front nine and completed the round with a total six birdies.

Senior Quade Cummins jumped 25 spots and is currently in a tie for 16th place. Cummins shot 66, his best score this season, in the second round to bring his two-day total to 138.

Sophomore Patrick Welch moved up 12 spots on the leaderboard with a 68. Welch posted seven birdies on the day and is tied for 18th at 139 for the event.

Senior Thomas Johnson is also tied for 18th. Johnson carded a 72 in the second round.

Oklahoma State posted a 2-under total of 282 during its second round on Monday to slip into fourth place.

Brian Stark carded his second consecutive 68 to lead the OSU starting five. The freshman stands at 6-under 136 and is tied for seventh place. Stark opened his round with a bogey before answering with birdies at the third and fourth. He moved to 2-under on the day with a birdie at the seventh before turning in even-par 36. On his inward nine, he posted three birdies against zero bogeys to come in with a 3-under 32 side.

Sophomore Aman Gupta posted a 71 during his second round to stand at 139 and tied for 18th place.

Sophomore Rasmus Neergaard-Petersen rounded out the lineup with a 74, giving him a 145 total and tying him for 43rd place.

The Cowboys will begin their final round tomorrow at 8:50 a.m. (PST) and will be grouped with Vanderbilt and Georgia.