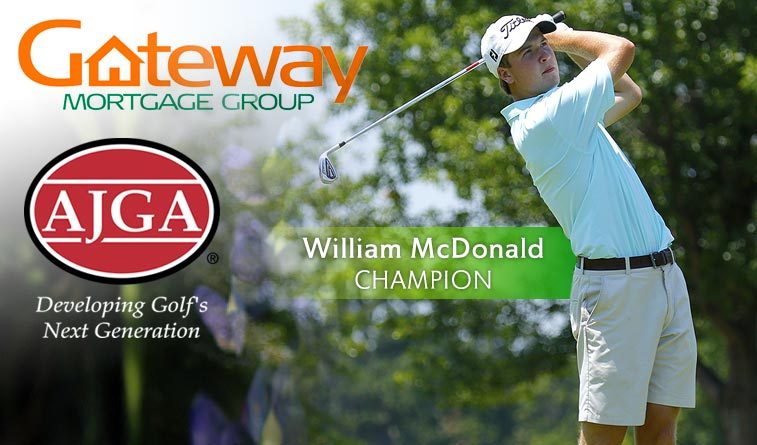 TULSA – William McDonald played a practice round at The Oaks Country Club with Dave Miley, one of the better players among the club’s members. He asked Miley what score he thought it would take to win the inaugural Gateway Mortgage Group Tulsa Open on the American Junior Golf Association tour.

Even par was the answer. McDonald, the two-time defending Class 4A state champion from Heritage Hall in Oklahoma City was dubious. Particularly so after he birdied the first four holes of the first round Tuesday and was 5-under after seven holes.

“I thought, he doesn’t know what he’s talking about,” McDonald said. “But turns out he did.”

McDonald won his first AJGA event in seven tries with a score of – you guessed it – even par 213 after a final round of 1-over 72 Thursday left him two shots clear of Terrin Anderson of Montgomery, Texas, and three shots ahead of Jordan Wilson of Edmond and Davis Woodliff of Tulsa.

Woodliff, the second-round leader, actually closed within a stroke after getting up-and-down from a greenside bunker on the 17th hole, but pulled his second shot on the par-4 18th left of the AJGA’s scoring tent , leading to a double-bogey.

McDonald has been sidelined most of the summer with a broken hand suffered in an early June basketball camp in Tulsa, as the lanky rising senior is also a member of the Heritage Hall hoops squad. Coaches we talked with peg him as probably the state’s top player in his class, but he has not committed to anyone for his collegiate career as yet.

McDonald’s blazing start to the first round eventually turned into a 3-under 68, followed by a 2-over 73 in the second round. He drove the ball erratically on the first five holes Thursday, but said he settled in after saving par on the fifth with a pitch from 80 yards to 4 feet. He birdied holes 7 and 10 and played steady down the stretch.

The boys field was laden with strong Oklahoma talent. Zane Heusel of Edmond and Jackson Dowell of Edmond tied for fifth at 4-over 217, followed by James Roller of Jenks and Jared Strathe of Owasso, who tied with Cole Grossi of Keller, Texas for seventh at 218.

Jillian Bourdage of Tamarac, Fla., shot the tournament’s low, closing with a 4-under 67 to win the girls division at even par and two shots ahead of Yu Wen Lu of China and five shots better than Jennie Park of Carrolton, Texas. The lone Oklahoman in the top 10 was Jenni Roller of Jenks at 12-over 225. Taylor Towers of Owasso tied for 12th and Raychel Nelke of Pocolo tied for 14th.

Maggie Roller, mother of James and Jenni and the director of instruction at Cedar Ridge, put together the committee and was the leading impetus for the AJGA returning to Tulsa. She was presented a special gift after by the AJGA staff for what many said was one of the smoothest and most financially successful events on the tour.

Rick Reed, director of golf at The Oaks, and superintendent Dan Robinson also received major kudos from players, parents and AJGA staffers for the superb conditions and hospitality. The Oaks played at about 6,900 yards for the boys and 6,200 for the girls and more than held its own, as the even-par scores of both winners attest.

“This is a course I would come back and play for fun anytime they would have me,” McDonald said. “It was a great test for this event.”