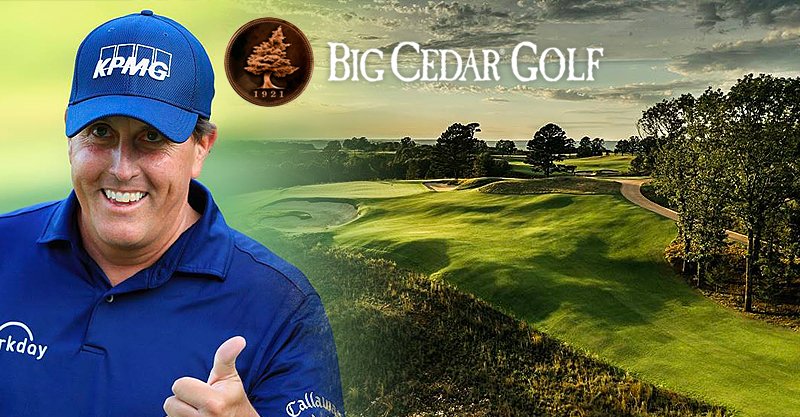 RIDGEDALE, Missouri (August 21, 2020) – Lefty is coming to the Ozarks and Big Cedar Lodge.

Phil Mickelson, one of the most popular players and top talents in the history of golf, announced today that he will be playing in the PGA TOUR Champions tournament taking place at Ozarks National from Monday, Aug. 24 through Wednesday, Aug. 26.

It will be the first PGA TOUR Champions event for Mickelson, who turned 50 in June and became eligible for the tour.

“I am looking forward to playing my first Champions Tour event in the Ozarks next week,” said Mickelson. “I am excited to see what Johnny Morris has created in the hills of the Ozarks. Johnny has been a great innovator for golf development and the PGA Tour. I know the Ozarks has been one of the favorite stops on the Champions Tour.”

Mickelson will tee it up at the three-day, 54-hole event at Ozarks National, bringing with him one of the most impressive resumes in golf history. He has won 44 PGA Tour events – ranking ninth all-time – and five major championships, including three Masters, one Open championship and one PGA Championship.

“It is an incredible honor to welcome Phil Mickelson, one of the game’s all-time great competitors, to Big Cedar Lodge,” said Johnny Morris, noted conservationist and founder of Bass Pro Shops and Big Cedar Lodge. “We are thrilled fans have the opportunity to watch Phil as he joins the PGA TOUR Champions tournament while experiencing the rugged natural beauty of Ozarks National.”

Mickelson will find a setting matching his Hall of Fame-worthy resume, of the Ozarks National course that has been the subject of world-wide acclaim since officially opening in 2019. Golf Digest selected Ozarks National as the Best New Public Course in the world last November in the publication’s annual rankings list. Additionally, last September Golf Magazine named Big Cedar Lodge as the No. 1 Family Golf Resort in North America, as part of its Top 100 Resorts issue for 2019-2020. Recognitions like these continue encouraging notable people and players to visit Big Cedar Lodge, including the likes of World Golf Hall of Famer Ben Crenshaw, who has visited and played the resort multiple times.

Fans can follow the action worldwide by tuning-in to The GOLF Channel, which will provide extensive coverage throughout the tournament. Set to air in more than 340 million homes in 170 countries, the broadcast will showcase the unmatched natural beauty of the area while spotlighting Johnny Morris’ vision for creating breathtaking golf courses that connect people to nature.