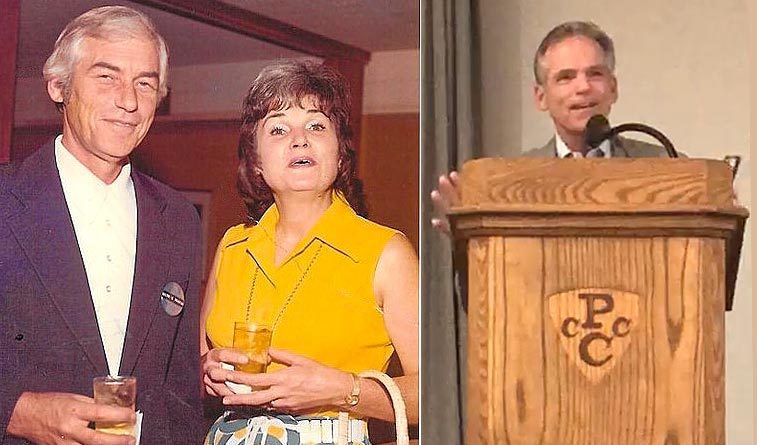 Mike McGraw wolfed down his dinner, reading and rereading his notes and confessed, “I’m nervous.”

Then he hopped up before a ballroom packed with family, friends and golfers from around the state, and in a 10-minute rapid fire speech that was equal parts humorous, witty, poignant and raw, knocked it out of the park while paying tribute to his father and mother, Gervis and Pat McGraw.

The Cherokee Strip honored the legacy of Gervis McGraw, head professional at Ponca City Country Club from 1957-1982, and his wife of 43 years Pat, who worked at his side during all the years the club hosted the famed Cherokee Strip pro-am, which raises money for the Opportunity Center in Ponca City.

“I have such great memories,” Mike said. “I’ve played in 17 Cherokee Strips now, but this one is pretty special without my parents.”

McGraw played in the tournament with his twin sister and Oklahoma Golf Hall of Fame member Patty McGraw, her husband Chuck Coatney, head professional at Stillwater Country Club and a long-time assistant for Gervis at Ponca City, and brother Tim McGraw, who finished first in the Senior Professional Category shooting rounds of 72-70.

Mike, former high school coaching legend, Oklahoma State coach and now the head coach now at Baylor, also participated in and won the 2018 Mr. Cherokee Strip Pageant on Friday night (see video) and fully embraced all that has made The Cherokee Strip such a fun and memorable event over the years.

Mike recalled how his mother revolutionized a woman’s role in the golf shop, not only by running day-to-day operations but by starting a woman’s boutique in the shop, selling dresses to the members.

“She was the smartest woman I’ve ever known in my life and she was only high school educated,” Mike said. “She read two books a week for 54 years. Just try that out. I tried to honor her memory in 2005 by reading one book a week and got through 35. I thought I did pretty well to do that.

“She learned and taught herself through reading. She taught herself accounting and kept his books. I know my dad couldn’t have done what he did without her help.”

As for his father, Mike shared several stories (video) that illustrated his father’s sense of humor, dedication and old-fashioned values.

Below are the results from this year 57th anniversary tournament. Preston Stanley of Katy, Texas, won the professional division, blistering the course with rounds of 66-62. Trent Whitekiller of Sallisaw was second, four shots back after rounds of 63-69. Rain forced some rounds to be delayed and even moved into the following day for completion.

Chip Huston, David Kinsinger, and Cynthia Wilson served as the Tournament Co-Chiefs and embraced the Back to the Strip theme with a special tribute in honor of Gervis & Pat McGraw.