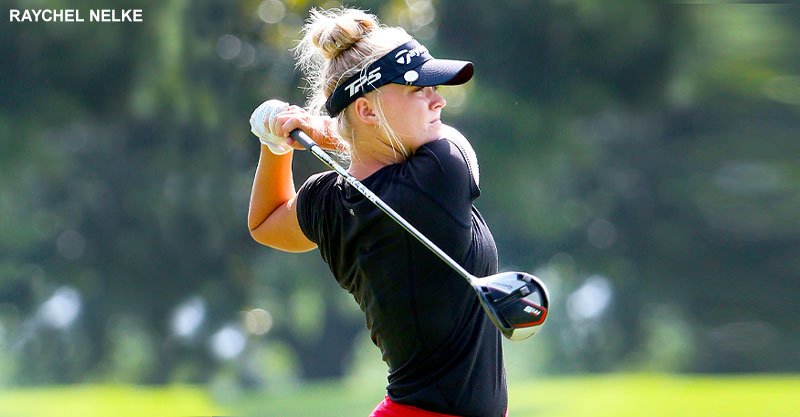 Results of all Classes here:

While her friend Jenni Roller was shooting a record 62 in the Class 3A state championship at Lake Muarry, Raychel Nelke of Pocola was taking command of the Class 2A tournament at Aqua Canyon, one of two courses at Cimarron National in Guthrie. The University of Oklahoma signee shot a first-round 68 to take a five-shot lead over Josie Cavitt of Turner (73) and six over Jaci Hartman of Turner (74), the only three golfers in the field to break 80.

In Class 6 at Lincoln Park West, Jenks established a three-shot lead over defending champion Edmond North, 317-320, with Edmond Memorial still in contention at 326. Rylee Roberts of Edmond North is the individual leader after a 73, two shots clear of Mimi Hoang of Westmoore at 75. Lauren Hurd of Deer Creek shot 76, while Olivia Coit of Edmond Memorial, Lily Stanton of Jenks and Amy Reavis of Stillwater each shot 77.

In Class 5A at Chickasha Pointe, Durant established a 17-shot lead over Duncan in the team race. Aubrey House of McAlester leads with a 71, followed by defending champion Mikaela Karanja of Durant at 72, Natalie Bolnien of Altus 73 and JJ Gregston of Duncan and Scarlet Sturch of Durant at 74.

The Class 4A state championship is scheduled to begin today at Buffalo Rock Golf Course in Cushing.