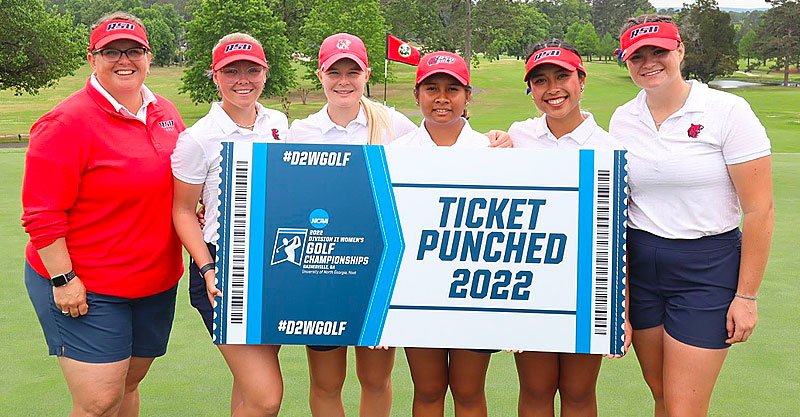 “I am so proud of this team!” said coach Whitney Hocutt. “We have been working toward this all season long. Just like every team in the nation, you just want to get the opportunity to keep playing through the postseason. That is exactly what this group did. They came together this week and played hard for one another and our program. Our entire team has worked hard on and off the golf course and this hard work was shown this week. We cannot say thank you enough to Hot Springs Country Club, Henderson State, all the volunteers, and the NCAA for a great week!”

After three rounds at the Par 72, 5,932 yard Hot Springs Country Club, the Hillcats finished with a card of 913 (+49) in third place. The top three teams and the top two individuals not on one of those teams advance to the National Championships.

The Hillcats will travel to Gainesville, Ga. to begin play in the NCAA Division II National Championships on Wednesday, May 11 at the Chattahoochee Country Club.

Olivares earned a berth in the NCAA Division II Women’s Golf Championship Finals with a runner-up finish. The Bronchos came in fifth in the team standings, closing with a 308 to finish with a 922 total. Henderson State won the nine-team tourney at 882, followed by Central Missouri (906) and Rogers State (913).

Olivares shot a final-round 74 to finish with a three-over-par 219 total in finishing second. UCO also got a 75 from Kinsley Hall and a 76 from Madison O’Dell, while Mika Ramos and Taylor Towers both shot 83.

“Susana had a great tournament and it’s great to see her moving on,” head coach Michael Bond said. “She played with a lot of consistency all three days and I look forward to seeing what she can do at the national tournament.

“Overall we didn’t play as well as we needed to, but I was proud of the way the girls competed. We’ve had a good season and it will be nice to be represented at nationals.”

Olivares got off to a great start Wednesday with a birdie on the par-5 first hole, but quickly gave that stroke back with a bogey on No. 3. She then reeled off 14 straight pars before finishing bogey-bogey.

The sophomore standout showcased her consistency by making a tournament-best 43 pars in the 54-hole event to go along with seven bogeys and four birdies.

Northeastern State’s season came to an end Wednesday with a sixth-place finish. The RiverHawks shot a 930 (311-311-308) and never could make any moves on the leaderboard, spending all three days in the same spot.

Aitana Hernandez moved up three places on the individual leaderboard, tied for tenth with a three-round total of 227 (75-77-75), and missed the cut to Nationals by four strokes.

Kaylee Petersen finished her final round as a student-athlete tied for 19th place, shooting a 230 (78-76-76).  She will move on to being the team’s graduate assistant coach in the fall after playing in 26 events for the RiverHawks.  Petersen held a 76.85 career stroke average, the third-lowest in the last decade for the program.

SWOSU concluded its season with a ninth-place finish. The team had a pair of All-GAC selections in Megan Brown and Mikaela Rindermann and continues its streak of regional appearances having now made the postseason field in each of the last nine years.