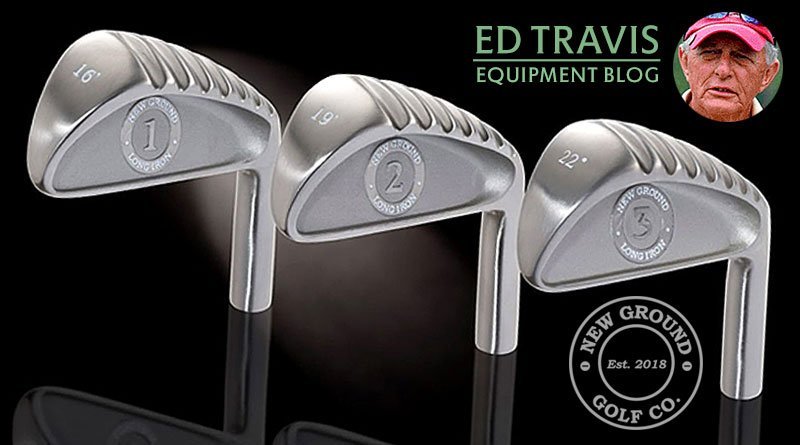 According to Joe Jung, one of the founders of New Ground Golf, the company was formed in order to build irons for those who don’t like (read “can’t hit”) hybrids. Their lineup at least for now is just three irons: a 16°1-iron, a 19° 2-iron and a 22° 3-iron.

The 431 stainless cast heads have a distinctive cambered sole with seven deep grooves that make the club almost glide over the turf and allows the iron to get the ball up and out of most any lie especially long grass. Those who have tried New Ground irons comment they hit more like a 5 or 6-iron than a long iron and shapes are easier to shape, a benefit that really separates them from hybrids.

New Ground positioned the center of gravity low in head and back towards the trailing edge plus made the hosel longer which moved weight towards the rear and improved playability. All of this plus a thin, reactive face produce more ball speed.

Our on-course testing of the 2-iron might be considered typical of the experience of others who have tried their clubs. The first shot was a flare to the right and the second a sweeping hook that missed the green by 20 yards.

With those out of my system the third, a 220-yard second on an uphill par-5, was nailed finishing just short of the putting surface probably a 195-yard carry. After that using a laser rangefinder carry distance was fairly consistent…certainly very consistent considering the usual inconsistency of my swing.

The distance though was not what was the most impressive since my major-manufacturer 19° hybrid hit the ball similar yardage. What was impressive was the New Ground’s high trajectory not usually seen from a long iron and even more was the ease to get the ball out of the long Bermuda grasses here in Florida.

A big plus is when choking down the shaft the ball flight stayed the same with the accompanying distance decrease which gives the New Ground irons versatility to tackle many different shot shapes and lies. And another positive was the performance of the  New Ground off the tee when faced with one of those sometimes pesky tight par-4 tee shots rapidly putting the 2-iron in the go-to club category.

Both sold online at NewGroundGolf.com

Need to Know:
Design particularly for players not satisfied with the distance control and shot-shaping ability of hybrids. Higher launch than conventional long irons. Sole helps to get ball up and out of most any lie.