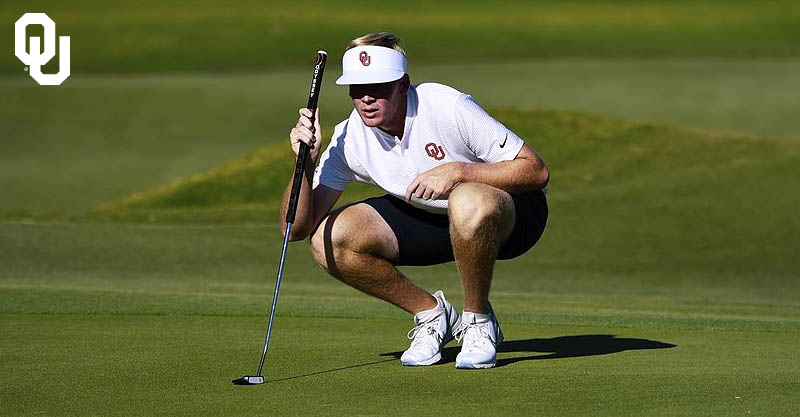 NAPLES, Fla. – The Oklahoma men’s golf team fired a first-round score of 5-over 293 and sits alone in third place at the inaugural Calusa Cup with two days of play left. The Sooners responded to a tough front nine with 12 birdies on the back nine to move up the leaderboard as the day closed, powered by Jonathan Brightwell and Quade Cummins, both inside the top 10.

The No. 2 Sooners are three strokes behind No. 1 Florida State and No. 13 Florida, setting up an exciting final 36 holes of play over Monday and Tuesday at the par-72 Calusa Pines Golf Club in Naples, Fla.

Oklahoma led the field on the back nine, firing a 2-under to close the day.

“The golf course is tough and will continue to be a challenge, but this is great to see our guys compete on difficult greens,” head coach Ryan Hybl said after the round. “Jonathan (Brightwell) played a solid round of golf today, and Quade (Cummins) and Garett (Reband) had great rallies to finish off the day. We will be better tomorrow.”

Brightwell paced the Sooners all day, opening with a par and birdie on his first two holes before tallying his only hole-above-par on the day, a double bogey on No. 5. The All-American answered with 10 pars and a trio of birdies to close his round with a 2-under 70, suitable for a share of second and three shots off the leader.

Fellow redshirt senior Quade Cummins used a strong back nine to move into a tie for sixth after 18 holes, carding an even-par 72. The Weatherford native strung together four birdies over his final six holes to help lead the Sooners back into contention. His seven total birdies on Sunday afternoon were the most in the field as he also led the field in par-four scoring.

PGA Tour University’s No. 2 player, Garett Reband, got in on the low scoring on the back nine, closing his round with three consecutive birdies to move into a tie for 25th. The All-American’s five opening-day birdies were tied for the most in the field as he was one of just two players to conclude the day with three birdies.

Logan McAllister and Ben Lorenz are tied for 31st after sharing 4-over 76s on Sunday.

For Lorenz, Sunday’s round marked his OU lineup debut, as the freshman from Peoria, Ariz., has appeared three times as an individual for Hybl’s team but never in the lineup. He opened his round with an even-par 36 on the front to place him inside the top 10 early, but a 4-over on the back would move the freshman back into 31st.

McAllister steadied his game on the back nine, collecting four birdies and finishing the day with four birdies over six holes to help guide the Sooners up the leaderboard.

The Sooners tee off on Monday starting at 12:50 p.m. CT with No. 1 Florida State and No. 13 Florida. Fans can follow live scoring on Golfstat.com.