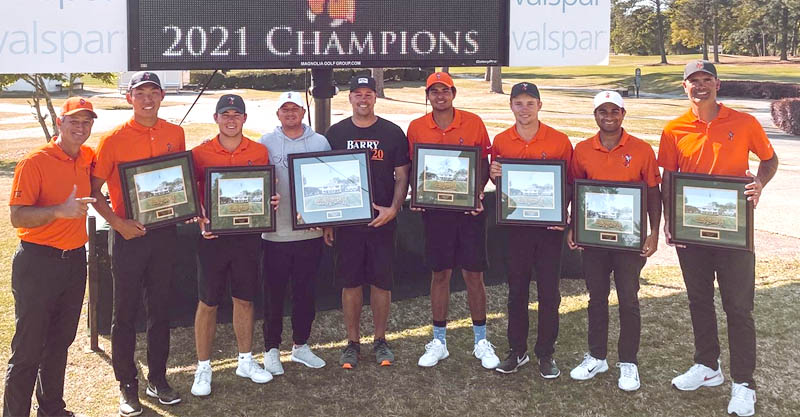 AUGUSTA, Ga. – Oklahoma State’s men’s golf team stormed back during the final round of the Augusta Haskins Award Invitational at Forest Hills Golf Club on Sunday to pick up its third win of the season in impressive fashion.

The Cowboys trailed Pepperdine by nine shots heading into the third round at the par-72, 7,053-yard layout before firing an 18-under 270 to come in two shots clear of the Waves. OSU finished at 37-under 827, Pepperdine finished at 829 and Notre Dame was a distant third at 845.

The win was OSU’s second in a row and 34th under the direction of head coach Alan Bratton.

South Carolina’s Ryan Hall posted a closing 64 to tie Pepperdine’s Dylan Menante atop the leaderboard before eventually claiming medalist honors in a playoff.

A trio of Cowboys finished in the top 10 individually and all five starters were among the top 25. Eugenio Chacarra led the way for OSU, firing a closing 67 to finish in sole possession of third place. The sophomore birdied his opening hole before carding his lone bogey of the round at the fourth. He would add birdies at the sixth, seventh and ninth to turn in 3-under 33. He posted a pair of birdies on his inward side for a 2-under 34.

The showing marked the fourth time this season he has finished in the top three.

Sophomore Aman Gupta carded a closing 66 to move up eight spots into fourth place at 206. Gupta, who now has three consecutive top 10s, bogeyed two of his first three holes before catching fire at the fourth. With birdies at Nos. 4, 6 and 9 he turned in 2-under 34. He came home in 4-under 34 with a bogey-free second nine.

Freshman Jonas Baumgartner posted a 66 of his own to rise 21 spots into a tie for eighth place at 210. His round included four birdies over his final seven holes en route to his second top 10 as a Cowboy.

Sophomore Rasmus Neergaard-Petersen carded his second consecutive 71 to tie for 25th place at 215.

Of note, OSU was without the services of All-American Austin Eckroat, who competed this week at the PGA Tour’s Valero Texas Open. Eckroat missed the cut in the event.