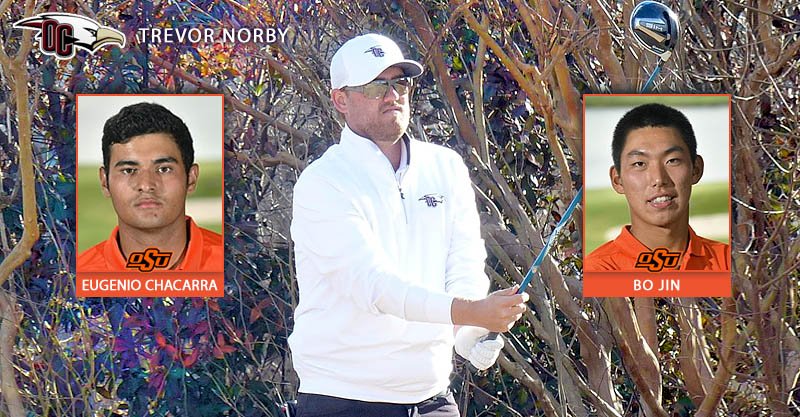 ORLANDO, Fla. (May 4, 2021) – Trevor Norby became the first Oklahoma Christian golfer ever selected to compete in the Arnold Palmer Cup when he was named Tuesday to the U.S. squad for this year’s event during an announcement on the Golf Channel’s Golf Central show.

Oklahoma State’s Eugenio Chacarra and Bo Jin were named to the International squad.

A total of 36 players were selected with nine men and nine women comprising each side.

The Cowboy duo most recently led OSU to its 56th conference title last week at Prairie Dunes Country Club in Hutchinson, Kan. In the victory, JIn tied for second place, while Chacarra tied for 10th place.

A freshman from Beijing, China, JIn’s runner-up performance at the conference championship was his best this season. Additionally, he has tallied three other top 10s, including a fourth-place showing at the Maridoe Collegiate Invitational.

Jin checks in at No. 129 in the World Amateur Golf Ranking, No. 32 in the Golfstat rankings and No. 40 in the Golfweek/Sagarin Ranking.

A transfer from Wake Forest and native of Madrid, Spain, Chacarra has tallied six top 10s during his first season in Stillwater. In addition to a pair of third-place showings, the sophomore has logged runner-up finishes at the Timuquana Collegiate and the N.I.T.

Chacarra is currently No. 31 in the World Amateur Golf Ranking, No. 6 in the Golfstat rankings and No. 11 in the Golfweek/Sagarin Ranking.

The Arnold Palmer Cup is an annual Ryder Cup-style competition between the United States and the International squad. This year’s event will be played June 11-13 at Rich Harvest Farms outside of Chicago.

The Cowboys have been well represented through the years since the event’s inception in 1997 with OSU players making 20 appearances. Additionally, former head coach Mike McGraw led the U.S. side in 2007 and current head coach Alan Bratton directed the American squad last year.

The Palmer Cup has been played at some of the world’s greatest courses including The Old Course, The Royal County Down, Royal Portrush, Baltusrol, The Honors Course and Cherry Hills. This year’s event will be played at one of the nation’s most exclusive courses, Rich Harvest Farms in Sugar Grove, Ill., from June 11-13.

Norby, a two-time All-American during his time at OC, is one of NCAA Division II’s best players again this season. The senior from Carlsbad, Calif., recorded his fifth career tournament win, taking the Lion Invitational in Trophy Club, Texas, and has seven top-five finishes in nine events with a stellar stroke average of 71.04 over 25 rounds. Over his three seasons with the Eagles, he has a 71.3 stroke average.

He played in late December in another prestigious college all-star event, the Patriot All-America.

“A few years ago, one of my close friends and teammates at the time played in the Palmer Cup and said it was the one of the coolest experiences of his life,” Norby said. “It was because of him that I made this a major goal I wanted to accomplish during my career as an amateur. To be selected is beyond special and validation that hard work does pay off. To represent the United States is a dream come true and I can’t wait for the opportunity.”

OC coach David Lynn has watched a good number of his current and former players compete in prestigious events such as the U.S. Amateur Championship, the World University Games and the British Open but Norby’s selection to the Palmer Cup is a first for him.

“Trevor has had an outstanding career at Oklahoma Christian,” Lynn said. “He has garnered almost every individual award available to him to win. I couldn’t be more proud of him for being selected to represent the USA in the 2021 Palmer Cup.

“The Palmer Cup is the absolute pinnacle of college golf. In my opinion, it is the highest honor you can achieve, being selected to represent your country for these matches. Trevor is 100 percent a team guy who will relish the opportunity to wear the red, white and blue.  He is a match-play bulldog who thrives on competing and will be an asset to Team USA.  What an amazing honor for Trevor, OC golf and Oklahoma Christian University to be represented in this competition.”

Since its inception, more than 100 former Arnold Palmer Cup alumni have gone on to earn cards on either the PGA Tour, European Tour or LPGA Tour. Twenty-nine have represented Europe or the U.S. in the Ryder Cup or Presidents Cup and more than 60 have claimed more than 250 victories on the PGA or European Tours, including three major championships in 2020. The United States leads the series 12-11-1.