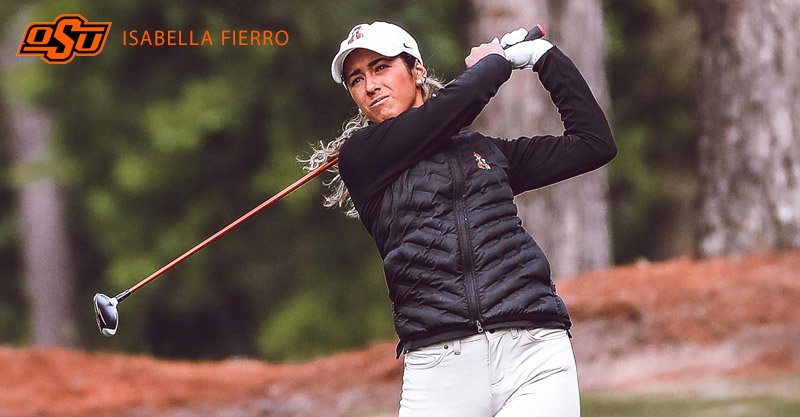 Named in honor of legendary golfer Arnold Palmer, the annual Ryder Cup-style competition pits the top men’s and women’s American collegiate golfers against their counterparts from around the world. Fierro will join Cowboy golfers Eugenio Chacarra and Bo Jin on the International roster.

She recently helped the Cowgirls bring home their 10th Big 12 title in record-breaking fashion. Fierro carded the first 7-under 65 in the event’s history and ended the week tied for sixth on the leaderboard, which earned her first career All-Big 12 Championship team selection.

Fierro enters the NCAA Regional ranked No. 10 nationally by GolfStat.com thanks to a 26-7 record against top-100 players. The 2020 WGCA All-American is currently listed at No. 69 by the World Amateur Golf Rankings.

In December of 2020, Stark became the first Cowgirl to play in the Arnold Palmer Cup. Stark helped the International Team claim victory to close the all-time lead for the United States to 12-11-1.

Since its inception, over 100 former Arnold Palmer Cup alumni have gone on to earn cards on either the PGA Tour, European Tour or LPGA, 29 have represented Europe or the USA in the Ryder Cup or Presidents Cup, and more than 60 have claimed over 250 victories on the PGA or European Tours, including three major championships in 2020.

Located less than an hour outside of Chicago, Rich Harvest Farms is consistently ranked in Golf Digest’s America’s 100 Greatest Golf Courses and has a history of hosting top events. This will mark its second time hosting the Arnold Palmer Cup, and it has also played host to the Solheim Cup in 2009 and the 2017 NCAA Championships.