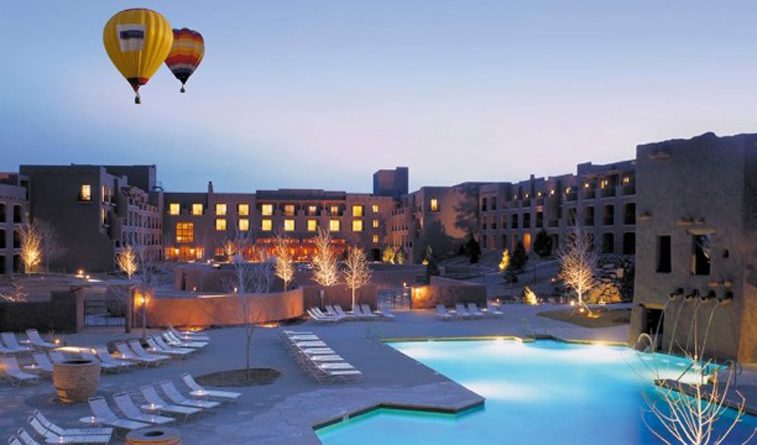 After filing a story from Edmond last Thursday on the OGA State Junior Championships, my wife Kim and I headed west for a few days respite, reminding ourselves what we like so much about New Mexico. Specifically the food, the scenery, the people and the golf.

We made it to Amarillo that night just in time to endure a 20-minute hailstorm, flash flooding and terrifying winds. Any trip that starts that way is destined to be fantastic. Memorable is already on the check list.

For Oklahoma golfers, we’ve written before about New Mexico’s offerings from Angel Fire in the far north to Las Cruces on the southern border. This weekend visit was just about Albuquerque, particularly the courses surrounding the Sandia Mountain.

We stayed at both the Sandia Casino Resort, which must have the friendliest, most attentive staff of any place we’ve visited, and the fantastic Hyatt Tamaya Resort in the Santa Ana Pueblo, home to both the challenging Twin Warriors course and the 27-hole Santa Ana Golf Club.

No disrespect to any other course, but from a personal golf perspective the highlight of every trip to this area is a round at Paa-Ko Ridge, one of my favorite courses anywhere. Open to the public at very reasonable rates, it has 27 holes with breathtaking vistas throughout. Located on the east side of Sandia Mountain, the micro climate is much lusher than in Albuquerque and the course is wall-to-wall with cool season grasses, including blue grass fairways and roughs.

Paa-Ko Ridge has a few blind tee shots, but for the most part architect Ken Dye made available all the information you need for a successful navigation of each hole by looking intently from the tee box. Execution is up to you and wayward shots will be gobbled up by Pinon trees and desert brush. But it’s a fair golf course in immaculate shape and stunningly beautiful.

Things are not quite so straight forward at Twin Warriors, another of the premier courses in the state and the Southwest. Many tee shots, if not blind, are partially obscured and the fairways veer off at angles to the tee shots. Choosing your best line to avoid the deep bluegrasss rough is crucial. We found balls that trickled into the rough could be advanced successfully about 120 yards and after that it was a crap shoot.

Twin Warriors is a course you need to play several times to be able to compete with the course from a strategic standpoint. My partner, even after losing a few sleeves of balls, was ready to give it another shot that afternoon, such is its allure. Best of all, unlike the 50-minute drive from Tamaya to Paa-Ko, Twin Warriors is just a few steps across the parking lot.

The Sandia Resort Course is in stunning condition early this summer. It had a double shotgun start the day we were there, so we just practiced and then took a course tour. As mentioned, the conditioning was sublime and the holes looked challenging but inviting. We’ve got this course penciled in for our next visit, along with the Santa Ana Golf Club.

If you have a little more time than we did on this trip, also be sure to play the University of New Mexico Championship Course, site of four NCAA men and one NCAA women’s championship. The Isleta Casino and Resort is another nearby worth checking out.

Here’s a few things not to miss in the area: Dinner at The El Pinto Restaurant and National Salsa Company. An evening on the veranda at the Tamaya watching the swallows and hummingbirds dart about before the moon rises over the Sandia Mountains, which constantly change in hue as the sun sets. The tram ride to the top of Sandia Peak. The trails down to the Rio Grande make for a beautiful nature sojourn and my wife had a great trail ride on horseback. Of course, if you like to throw your money away at the tables, the Sandia Resort is an exceedingly accommodating place to do it.