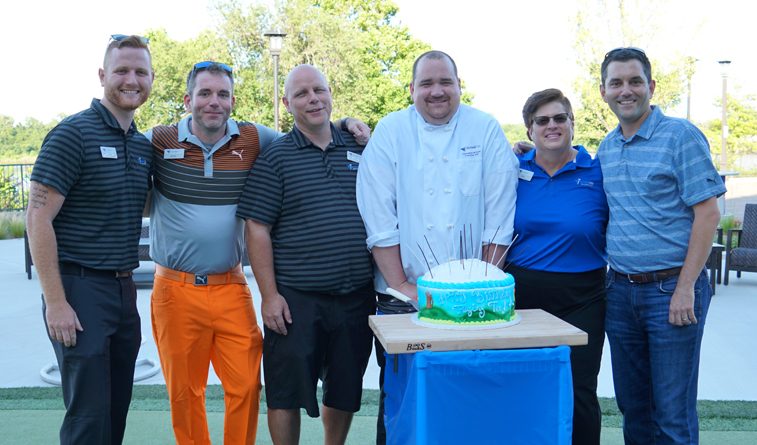 Founder John Vollbrecht looked like a man at a festive birthday party. He had taken a pie in the face and was still wearing the better part of it. As he surveyed the busy scene at FlyingTee last Wednesday during the official first birthday party for the golf entertainment venture in Jenks, he was optimistic that, despite some early missteps, the future was bright not only in Jenks but as the company begins to develop more sites nationally.

FlyingTee is a 70-bay, three-story range offering electronic golf games using sophisticated ball tracking technology. When it opened, it had different themed restaurants on each floor. While the hitting bays have always been popular, Vollbrecht said much was learned over the first year about what customers waiting for a bay wanted to experience.

Now, all three levels are served by the main restaurant, which offers a new menu keeping the most popular items and adding some new ones, but the theme is burgers, wings, sandwiches and other fun bar fare.

The second floor which opened as a rotisserie restaurant is now an open entertainment room with pool, shuffleboard, foosball, Golden Tee, X-Box and more while still having a long bar and plenty of seating. Like all floors, it opens to an outdoor seating and bar area with plenty of televisions tuned to sporting events.

“Before, if there was a long wait for a bay, people might leave,” Vollbrecht said. “Now they can come in here and have a great time. Also if you have eight people at a bay and two of them don’t want to play golf, they end up in here.”

A renovation is underway now on the first level both inside and out. The outdoor area features comfortable seating, a practice putting green where contests are held, as well as bean bag toss, oversized games such as Jenga or chess, and other activities. As traffic has picked up at Riverwalk Crossing due to the opening of new shops and restaurants, walk-up traffic has picked up considerably.

“It’s getting there,” Vollbrecht said. “We wanted to make this an entertainment venue more than just a golf venue or a restaurant. That’s what all the changes are geared around. We want to be the place Tulsans think of for an entertaining night out.”

Vollbrecht said the staff has come light years in providing consistent friendly service since opening. The venue has added league play and is hosting many charity golf tournaments. Group sales and corporate sales are steadily rising.

“I think what all of us underestimated at first was people are coming here primarily for the golf,” Vollbrecht said in explaining the changes since opening. “You’ve got all these great restaurants in the area, so they weren’t coming here just to eat. When you’re in the bay, you want cheeseburgers, finger foods.

“It’s easy to make adjustments to the menu and atmosphere. If the golf didn’t work, that would have been a problem, but that has been fantastic since Day One.”

Note: The Swing Fit Golf Oklahoma Radio Hour will broadcast live from FlyingTee Saturday from 8 a.m. to 9 a.m. Guests will include Associated Press golf writer Doug Ferguson live from the U.S. Open at Erin Hills as well as Vollbrecht.

FlyingTee has Father’s Day and U.S. Open specials on tap this week. For more information, go to www.flyingteegolf.com.