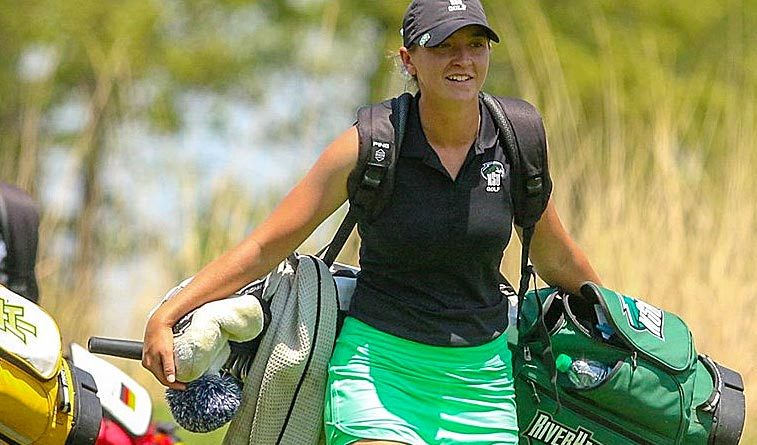 TAHLEQUAH – A pair of top-10 rounds in the opening day of the Central Region Fall Preview gave the RiverHawks a one-stroke lead with a 302 Tuesday at the Prairie Highlands Golf Club.

NSU freshman Aitana Hernandez made her debut with a team low 74, which put the Alicante, Spain native tied for sixth place.   Sitting behind by one stroke is Collinsville native Nina Lee who is tied for eighth in her first official collegiate round.  The pair finished the day with five birdies and 23 par scores.

The RiverHawks hold a slim one-stroke advantage over Arkansas Tech and Central Missouri, with Central Oklahoma in fourth carding a 306.

Lexi Armon shot a 76 that landed her tied for 13th overall and Kelsey Lumpkin was a shot behind, tied for 20th place.  Ebba Moberg finished the day with an 80 and is tied for 39th.

“Proud of our freshmen to say the least,” said head coach Scott Varner.  “It is just one round, but it gives us reason for great excitement and expectations this year. Our freshmen were fearless today in their first rounds of college golf on a big stage and a strong field.”

“Lexi and Kelsey showed some senior toughness after rough starts and finishing strong when we needed them.”

Arkansas Tech’s Peerada Piddon is the overall medalist leader with the lone under-par scored carding a 71.

A senior veteran and freshman newcomer led the way for Central Oklahoma.

“I was really proud of the team today,” head coach Michael Bond said.  “They got off to a great start then survived a tough five-hole stretch where we dropped some shots.  I was happy to get a round under our belts and hopefully we can improve on it tomorrow.”

All five UCO players shot 80 or better in the opening round.

Junior Sydney Roberts finished with a 77, while sophomore Yuna Sato shot 79 and freshman Faith Stewarthad an 80.