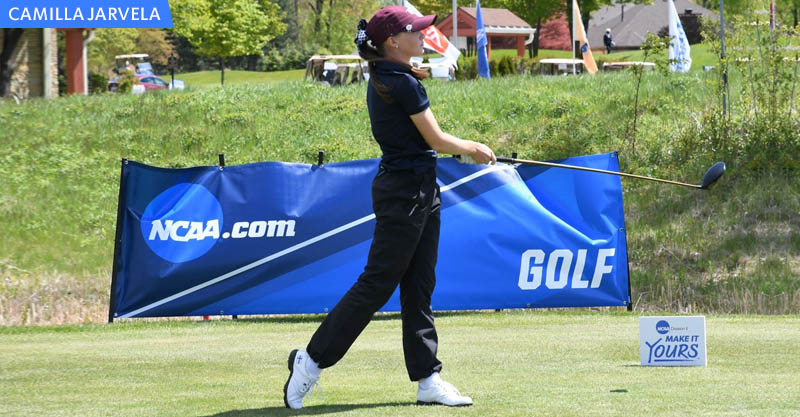 DEARBORN, Mich. –Northeastern State and Rogers State wrapped up play Thursday in the 2021 NCAA DII National Championship without making a run at one of the top eight positions that advance to match play. NSU finished in 11th and RSU was 12th.

Kaylee Petersen led the RiverHawks Thursday with her second round of 5-over 77 of the tournament. She tied for 42nd place. Aitana Hernandez shot 80 and was the top finisher for NSU with a 235 for 38th place.

Northeastern State finished in the top four of its first eight tournaments. The RiverHawks are expected to return all five starters next season.

Rogers State’s record-setting season also came to an end. In her final round of collegiate golf, Sydney Murray was a joint leader for the Hillcats on the day, shooting 78 to tie for 38th.

The Rogers State’s season comes to a close with two victories, five top three finishes, and top five finishes in every event leading up to the national championships.

Jarvela, a freshman from Espoo, Finland, who competed in the tournament as an individual, tied for 42nd in the 72-woman field with an overall three-round score of 236 (20-over).

She started her final round on No. 10 tee two hours late due to a frost warning. Her only birdie came on the par-3 No. 4 and she added eight pars, eight bogeys and one double bogey.

Jarvela qualified for the national tournament by virtue of her runner-up individual finish in the Division II West Super Regional last week in Denton, Texas. By making the tournament field, she continued an impressive streak for OC golf, which has had at least one qualifier for the Division II Championship each year since 2016 that the tournament has been played.