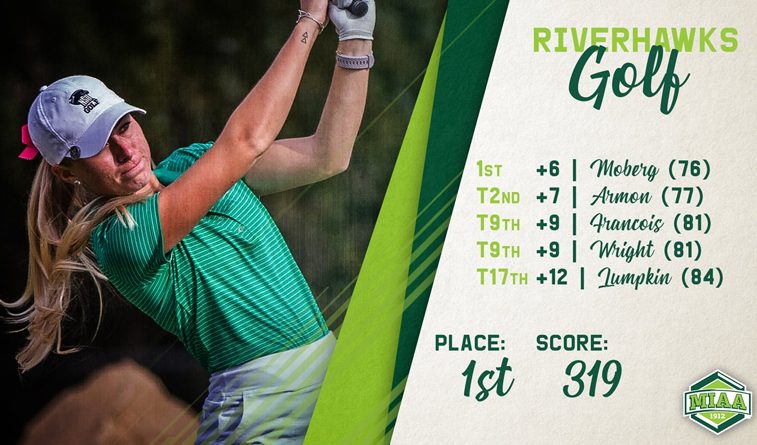 The RiverHawks, winners of the past two MIAA Championships, carded a 319 with junior Ebba Moberg as the medalist leader with a 78 (+6).

Being on top of the team leader board is familiar territory for Northeastern State who has led the last seven rounds of the MIAA Championship.

Northeastern State paced the nine team field with 44 pars with Moberg having 11 in the first day of the Championship.

Lexi Armon is tied for second place overall with a 79 (+7), with Sumie Francois and Halie Wright was two shots back tied for ninth overall; Kelsey Lumpkin carded an 84 and is tied for 17th.

Lindenwood is right on NSU’s heels for the team lead with a 320, with Central Oklahoma behind in third scoring a 328.

Northeastern State will be final group on the course on Tuesday where they will tee-off on the first pin at 10:10 a.m.

UCO was paced by sophomore Sydney Roberts, who is tied for second place in the individual race after she shot a 7-over 79. Roberts birdied the 452-yard par-5 fifth hole and added 10 pars on the day. She is one shot back of the leader.

UCO senior Marla Souvannasing is tied for sixth place after shooting an 8-over 80. Souvannasing got off to a good start, landing a birdie on the first hole of the day.

Second round action tees-off at 8:30 a.m. Tuesday. The Bronchos will aim for their fourth MIAA Championship Wednesday.

Bryce Newton is tied for the overall lead and the NSU RiverHawks are in fourth following the opening round on Monday of the MIAA Men’s Golf Championship.

The NSU senior shot as low as a four-under before finishing the day with a 70 (-2) which was one shot off from matching his season best.

Northeastern State sat on top of the team leader board early with a three par scores and Newton’s four-under before settling in with a 298.

Casey Paul carded a 74 and is tied for 13th place with both Ty Shelnutt and Hunter Pennington scoring 77s, and tied for 32nd.  Navid Majidi shot an 85 and is in 54th place.

The RiverHawks are six shots off of the lead with Missouri Southern carding a round high 60 pars.

The University of Central Oklahoma men’s golf team is tied for sixth place after the first round. Senior Eli Armstrong is tied for first individually after shooting a 2-under 70 at the 7,081-year Sycamore Ridge golf course Monday.

Armstrong made four birdies on the day. He began the tourney with six-straight pars before bogeying seven but recovered with a par and his first birdie to finish an even 36 halfway through. After another bogey on 13, the senior birdied three of his final five holes to move to 2-under and in a tie for first place.

UCO also got help from Holden Crago, who shot a 1-over 73 to land in a tie for ninth place. Crago birdied three of the five par-5s on the course.

Central Oklahoma returns to the course Tuesday morning for the second round. The championship, won each of the past two seasons by the Bronchos, wraps up Wednesday.