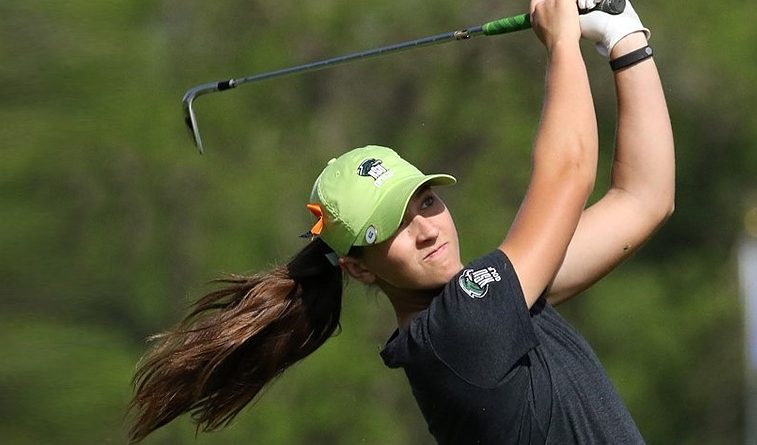 SIOUX FALLS, S.D. (May 9) – Wednesday will be a do or die for Northeastern State, the University of Central Oklahoma and Southwestern Oklahoma State, all of whom are just outside the top three at the NCAA Super Regional here.

The top three teams and first three individuals not on one of those teams advance to the national tournament.  The NCAA Division II Women’s Golf Championships are set for May 17-20 in Findlay, Ohio.

For NSU, Baylee Price and Ebba Moberg are both tied for 18th place with a 156 though two rounds.   Kelsey Lumpkin, NSU’s fifth player carded the team’s second lowest score with a 78 and presently sits in 23rd place with a 157.

Lexi Armon and Halie Wright both have 160s, and are tied for 29th place.

UCO’s Marla Souvannasing surged near the top of the individual leaderboard with a 74 Tuesday, putting her in a fifth place tie. Souvannasing’s 74 was the second-lowest score of the day as the sophomore standout made a big move in the individual standings.  UCO also got a 79 from Anna Pool, while Sydney Roberts shot 82, Makena Mucciaccio 82 and J.T. Neuzil 94.

Souvannasing birdied both par-5s on the front nine to help offset three bogeys in making the turn at one-over 36.  She double bogeyed the par-3 10th hole to fall to three-over, but rebounded to par the final eight holes for a back-nine 38.

Souvannasing shot a first-round 78 and is at 152 for the tournament, four strokes behind the leader.

Pool, who had a share of the medalist lead after an opening-round 74, got off to a solid start with a front-nine 38 before struggling to a 41 on the incoming nine.

Roberts was seven-over-par after the first six holes, but steadied herself with six straight pars and played the final 12 holes three-over.

SWOSU is still in the hunt, helped by Gloria Choi, who carded a team-best 73 on Tuesday, two shots better than Elin Wahlin’s team-leading first round score on Monday. The sophomore sits tied for ninth with two other competitors and just one shot away from breaking the top five.

Wahlin shot a 79 in her second round, four strokes higher than her round one score and was the only other Bulldog golfer to fire in the 70s on Tuesday. Wahlin sits just outside of the top-10 competitors after round two in 12th place overall.

Jenna Eidem ended the day with an 81, Emily Folsom 82 and Chloe Thackeray 85.

Round 3 of the Central Region Championships will tee off on Wednesday morning in Sioux Falls. Folsom leads the Lady Bulldogs off at 8:00 am, followed by Thackeray (8:10 am), Eidem (8:20 am), Wahlin (8:30 am) and Choi (8:40 am) as SWOSU plays alongside Northeastern State and Central Oklahoma.