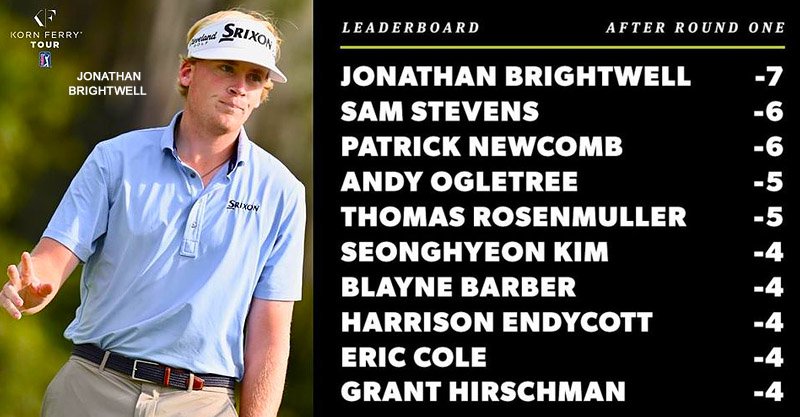 Former Oklahoma Sooner Jonathan Brightwell fired a 7-under 64 to take a one-shot lead after the first round of Korn Ferry Tour Final Stage Qualifying at the Landings Club in Savannah, Ga.

Tied for second at 6-under 65 is former Oklahoma State player Sam Stevens of Wichita, who has dominated the All Pro Tour the past two years.

All of the players who made it to final stage have Korn Ferry Tour cards for 2022, but the top 40 are assured plenty of starts early in the season.

Former Sooner Grant Hirschman is tied for sixth at 4-under, while former OU golfer Garett Reband and former Cowboy Austin Eckroat of Edmond are tied for 24th after rounds of 68. Logan McAllister of Oklahoma City shot a 1-under 71 and is tied for 73rd, while Quade Cummins of OU and Weatherford is tied for 87th after a 72.

Brightwell, like many of the top pros and amateurs in the state, is now a member at Oak Tree National in Edmond.

Another OTN member, former OSU star Matthew Wolff, ripped off a 10-under 61 Thursday to take 2-shot lead in the World Wide Technology Championship at Mayakoa, Mexico.

Talor Gooch, another former Cowboy All-American and Oak Tree member, was tied for third at 7-under with two holes to play.