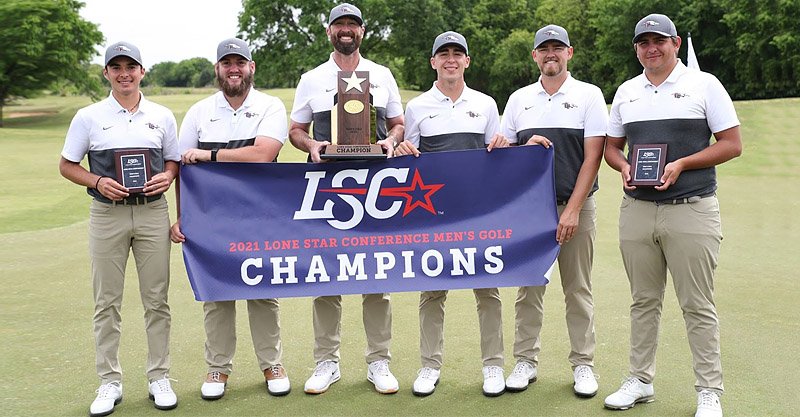 ARLINGTON, Texas (April 21, 2021) – There can be only one first in anything, and when it comes to winning Lone Star Conference championships at Oklahoma Christian, the 2020-21 men’s golf team always will hold that distinction after a scintillating Wednesday at Tierra Verde Golf Club.

No. 15-ranked OC held off an early push by Midwestern State (Texas), then was pulling away by the end of the final round for an 11-shot win in the LSC Championship, the Eagles’ fifth tournament win of the season. Four Eagles finished in the individual top 10 in the 65-man LSC field, with third-place Trevor Norby and fourth-place Mateo Pulcini earning all-tournament honors.

Not only was it the first LSC title for any OC team since the university joined the league with the 2019-20 season, the win also gave the Eagles consecutive conference titles, as they ended their run in the Heartland Conference with a title in that league in 2019. The 2020 LSC tournament was cancelled due to the COVID-19 pandemic.

OC now has as many conference titles (three) as it does national titles. Before 2019, the Eagles’ previous league crown came in 2009 in the Sooner Athletic Conference. The win also earned the Eagles the LSC’s automatic bid to the NCAA Division II South Central-West Super Regional tournament, which will be played May 6-8 at The Home Course in DuPont, Wash.

As a team in 2020-21, the Eagles have an 83-5-2 record against Division II competition. Only one Division II team (Central Missouri) has beaten the Eagles since the start of October.

“I’m extremely proud of our entire team this week,” OC coach David Lynn said. “It was a true team effort from top to bottom. It’s never easy to be the favorite, but these guys have relished the opportunity to face the pressure and expectations. Winning the first LSC championship is a great honor for this group. That’s something they will always remember and celebrate.”

The final numbers showed OC closed with a team round of 279 (9-under-par) and finished the tournament at 858 (6-under-par), with Midwestern State at 869, led by tournament medalist Jake Doggett at 206 (10-under-par). Texas A&M-Commerce and Cameron tied for third in the 13-team field at 887, 29 shots behind the Eagles.

The Eagles led the tournament wire-to-wire, seizing the lead early in Monday’s first round and never letting go of it. There were a few hairy moments, though, particularly on Wednesday, a day with near-perfect scoring conditions early on, with little to no wind to defend the 6,975-yard course.

OC started the day with a six-shot lead over Midwestern State, but the Mustangs quickly closed that gap to three shots over the first three holes, thanks to a couple of early birdies and a couple of miscues by the Eagles. But Pulcini and Alex Motes, playing at the No. 3 and 4 positions, respectively, on Wednesday, turned the tide for the Eagles.

After a bogey on the opening hole, Pulcini, a freshman from Rio Cuarto, Argentina, didn’t have another but did have five birdies while shooting a 4-under-par 68. His Midwestern State counterpart, Kolton Baber, shot a 74, a six-stroke difference. Motes, a junior from Sulphur Springs, Texas, had five birdies against only two bogeys and shot a 69, while Midwestern State’s Conrad Rafferty had a 71.

The Eagles counted those two scores, along with a 2-under 70 by Norby, a senior from Carlsbad, Calif., and a 72 from sophomore Alejandro Armijo of Rio Rancho, N.M. Armijo improved his on his second-round score by seven shots.

“Alex, Mateo and Ale came up huge today,” Lynn said. “They knew we needed a true team effort to maintain control of the tourney and they never let up off the gas.”

Norby, who has finished in the top 10 in all eight of the Eagles’ Division II tournaments this season, had a final score of 212 (4-under), while Pulcini – the LSC’s freshman of the year – was at 214 (2-under). It was his sixth top-10 finish this season.

Not long after Brictson’s long putt, the Eagles and many of their friends and family members were back on the 18th green, posing for pictures with the LSC championship trophy and banner and celebrating the landmark win.

“We want to win championships,” Lynn said. “This was a huge first step in achieving our goals this year. We are going to enjoy celebrating this win for a few days then get back to work.”