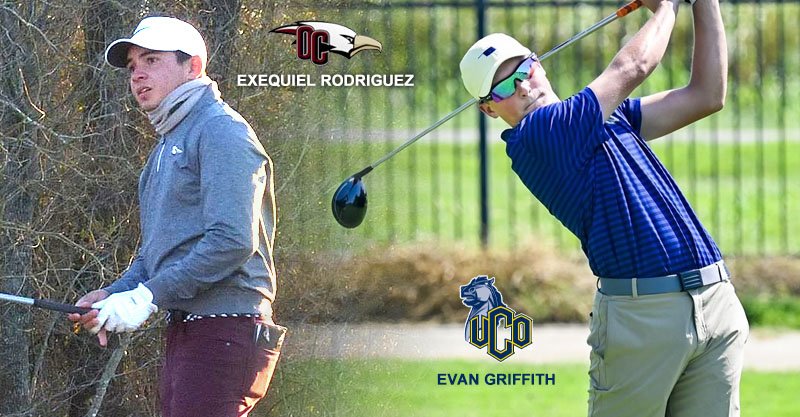 HUMBLE, Texas (Feb. 7, 2022) – Arkansas Tech won last season’s NCAA Division II title, even as the Wonder Boys lost twice along the way to Oklahoma Christian in head-to-head tournaments. Matched up against OC again on Monday in the Houston Classic, Arkansas Tech backed up its current No. 2 national ranking.

After a tough first round at The Golf Club of Houston, No. 6-ranked OC put together a strong second round to move into a tie for second in the 14-team field, but the Eagles – who have won their last three tournaments against Division II competition – will have an uphill battle Tuesday to continue that streak. OC, with a two-round score of 593, trails Arkansas Tech by 19 strokes entering the final round.

OC players recorded 25 birdies on Monday, the second-highest total in the field – behind Arkansas Tech’s 36. OC’s final-round score of 291 was one of the day’s top four rounds by any team, with Arkansas Tech having the other two (293 and 281).

The good news for OC is that it jumped two spots in the team standings with its good second round. The Eagles, who had a 302 team score in the first round, closed a 14-shot gap on Central Oklahoma to move into a tie with the Bronchos. Both those teams are nine shots clear of fourth-place Cameron.

Two OC players will enter Tuesday in the individual in the top 10 in the 87-man field. Freshman Exequiel Rodriguez of Buenos Aires, Argentina shot rounds of 3-over-par 75 and 71 and is at 146 (2-over). One shot behind him, tied for eighth, is junior Alejandro Armijo of Rio Rancho, N.M., who shot a 76 and a 71.

Sophomore Mateo Pulcini of Rio Cuarto, Argentina (76-74) and senior Andres Brictson of Merida, Mexio (75-75) both were tied for 15th at 150, along with freshman Oskari Nikku (77-73), who’s playing as an individual for the Eagles in the tournament.

OC freshman Santiago Villareal birdied three of the 6,945-yard course’s par-3 holes in the second round while posting a 75 to go with his first-round 81. At 156, he’s tied for 44th.

Evan Griffith used a career-low morning round to seize the individual lead and put Central Oklahoma among the team leaders after first-day play at the Houston Classic.

Griffith fired a sizzling 6-under-par 66 in the first round before shooting an afternoon 73 in finishing at 5-under 139, good for a one-shot lead heading into Tuesday’s final round.

“We got off to a great start this morning, but didn’t play very well in the afternoon,” head coach Derrick Thompson said. “Evan really had it going in the first round and overcame a couple hiccups to keep his round together in the afternoon.”

Griffith started first-round play on No. 4 and bogeyed his second hole before reeling off four straight birdies. He added three more birdies on the last 12 holes to finish off the career-best 66.

The sophomore standout was one-under through 12 holes in the afternoon, but went three-over on his next two holes. Griffith rebounded with three pars and a birdie on the par-4 second to finish off the 73.

Baldwin birdied his last two holes in the morning to come in at one-under 71, then added an afternoon 74. He’s tied for fourth in the individual race at 145.