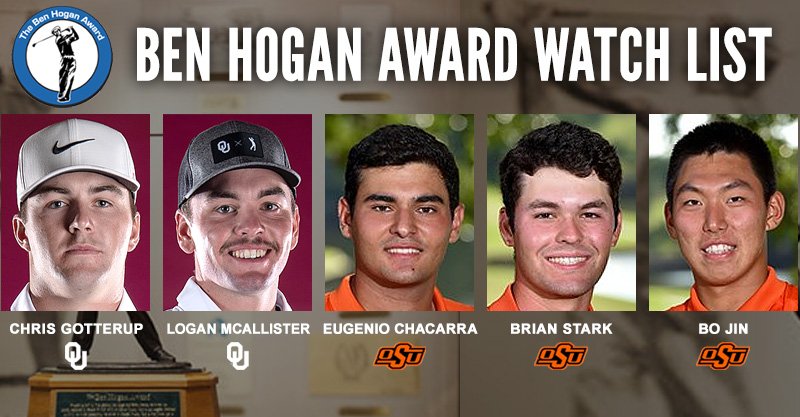 Oklahoma State has three golfers and Oklahoma two named to the watch list for the 2022 Ben Hogan Award presented by PNC Bank, given annually to the top men’s collegiate golfer based on all collegiate, amateur or professional events. The joint announcement was made by the Hogan Trophy Award Foundation, the Friends of Golf (FOG) and the Golf Coaches Association of America (GCAA).

Eugenio Chacarra, Brian Stark and Bo Jin are on the list from Oklahoma State as are Sooners Logan McAllister and Chris Gotterup.

McAllister and Gotterup are the senior leaders of the top-ranked Oklahoma men’s golf team as head coach Ryan Hybl and the Sooners seek the program’s third national championship this spring. Oklahoma is one of seven schools with at least two golfers on the list, and the field will be narrowed to 10 semifinalists on April 15.

Gotterup enters the spring as the nation’s No. 1 golfer as ranked by Golfweek and No. 7 nationally per Golfstat. The former Big Ten Player of the Year for Rutgers transferred to Oklahoma for his final year of eligibility in 2021-22 and has exploded onto the college golf scene. In October, the Little Silver, N.J., product won the East Lake Cup and powered the Sooners to a team championship at the historic cup by defeating rival Oklahoma State in match play. Gotterup posted back-to-back top-three finishes to close his fall and leads the Sooners with a 69.90 scoring average, which would be the third lowest in school history if the season concluded today.

McAllister has been a rock in Hybl’s lineup for the last two seasons, ascending into the top-five nationally last season. He enters the spring ranked 15th by Golfweek and 20th by Golfstat. The school’s active leader in career scoring at 71.34, McAllister was an All-American last season and owns three career wins. His 70.22 scoring average this season is powered by a team-low round of 65, which he carded in the final round of the Colonial Collegiate Invitation to seal an OU victory.

Chacarra led the Cowboys to victory Saturday, shooting a course-record 10-under 62 in the final round of the Amer Ari Invitational on Saturday at Hapuna Golf Course. Chacarra took medalist honors at 19-under 197. The OSU senior finished two shots clear of the field after matching the school’s 18-hole scoring record held by four other Cowboys.

Junior Brian Stark came into his own in the fall season, recording top six finishes in OSU’s three stroke play events. Jin was a second team All-America as a freshman in 2020-21, finishing second in both the Big 12 Championship and the Stillwater Regional.