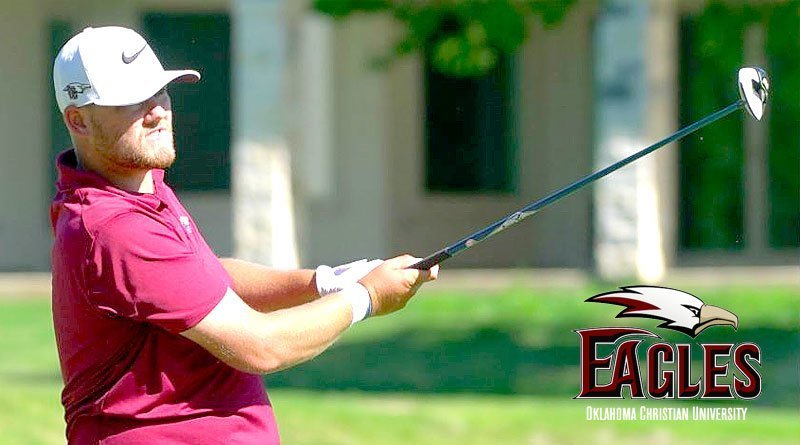 Photo: OC junior Trevor Norby watches a drive during the second round of the Heartland Conference Championship on Monday. He shot an 8-under 64.

HORSESHOE BAY, Texas (April 15, 2019) – Two players went lower than anyone else ever had in the 20-year history of the Heartland Conference Championship on Monday, but by the end of the round, Oklahoma Christian’s Trevor Norby had risen to the top of the leaderboard.

Norby’s sizzling 8-under-par 64 at Slick Rock Golf Course put him at 11-under 133 for the tournament and gave him a two-shot lead over teammate Andres Brictsonheading into Tuesday’s final round. The duo helped No. 13-ranked OC close the gap in the team race by five shots against No. 9 St. Mary’s (Texas), which now has just a one-shot edge over the Eagles.

Hudson Ross of St. Edward’s (Texas) lit up the 6,867-yard course about 50 minutes ahead of Norby, also posting a 64 that put him in third place individually, three shots behind Norby. The rounds matched the lowest in relation to par in Heartland history, an 8-under 63 posted by former OC star Sam Johnston during the U.C. Ferguson Classic at Lincoln Park Golf Club’s West Course in Oklahoma City in September 2012.

Norby’s 8-under round was only the eighth in OC’s considerable men’s golf history and the first since Johnston’s. At 11-under, Norby also matched the school and conference record for low 36-hole score, set by current OC senior Garrett White in September 2017 in the Great American Conference Preview at Lake Hefner Golf Club’s North Course in Oklahoma City.

Norby, a junior from Carlsbad, Calif., who won his first collegiate tournament last month – the Broncho Invitational at Oak Tree Country Club’s East Course in Edmond, Okla. – had four birdies in his first five holes and finished with nine overall, against only one bogey. That allowed him to zip up the leaderboard from eighth into first.

Brictson, a sophomore from Merida, Mexico, started the day in second place individually and finished there too thanks to a 69 that put him at 135. After a tough start, in which he bogeyed two of the first five holes, Brictson rebounded to record five birdies in a seven-hole span. His 9-under score now is tied for third-best through 36 holes in program history.

Behind Norby and Brictson, the Eagles posted a team score of 284 (4-under) while St. Mary’s finished at 289. The Rattlers’ two-day score of 557 is just ahead of OC’s 558, with St. Edward’s third at 568. OC is seeking what would be its first Heartland Conference men’s golf team title and its first league title of any kind since 2009, when the Eagles won the Sooner Athletic Conference crown.

White, the defending Heartland champion, shot an 82 and was at 150 through two rounds, tied for 33rd.

The first-round leader, All-American Emilio Gonzales of St. Mary’s, posted a 72 and dropped to fourth at 137, four shots behind Norby.

The final round will begin at 8 a.m. Tuesday.