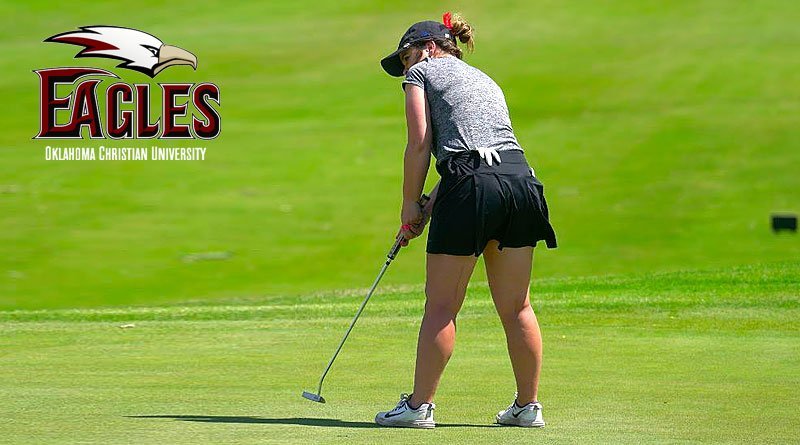 Photo: OC senior Kate Goodwin watches a putt on Monday at the Heartland Conference Championship. She was tied for ninth after two rounds.

HORSESHOE BAY, Texas (April 15, 2019) – The wind blew and the scores rose on Monday at Slick Rock Golf Course in the Heartland Conference Championship, but not for Oklahoma Christian’s Shaley Goad.

Goad, a sophomore from Wheeler, Texas, shot a 1-under-par 71 – matching the second-best round of her collegiate career – to move into second place in the 43-woman field. At 1-under 143 for two rounds, Goad trails only Ann Parmerter of Dallas Baptist (Texas), who also shot a 71 Tuesday and is at 5-under 139.

No. 2 Dallas Baptist leads the tournament with a 580 score, posting a 296 on Monday.

Goad had four birdies and three bogeys during a round in which players competed in winds gusted above 20 mph. She’s now posted two of her best three rounds of the season in the Heartland tournament.

OC junior Abigail Rigsby of Courtenay, British Columbia, was 3-under for her round at one point and held on to record a 72 on the 5,943-yard course. Senior Kate Goodwin of Tulsa posted a 76 and was tied for ninth after two rounds at 148 (4-over).

Senior Elizabeth Freeman of Edmond’s 81 put her at 153, in a tie for 17th. Sophomore Felicity Wittenberg of West Pymble, Australia, fired a 93 and was 40th overall at 175.

The tournament’s final round will begin at 8:05 a.m. on Tuesday.