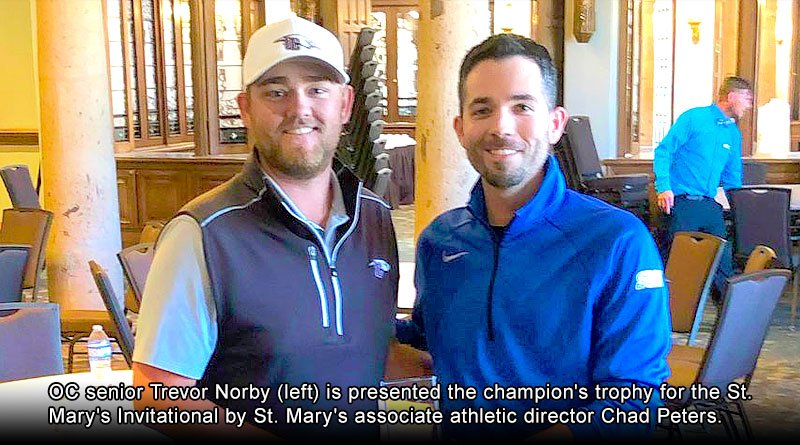 SAN ANTONIO (Feb. 25, 2020) – In a showdown with a fellow returning NCAA Division II All-America golfer, Oklahoma Christian’s Trevor Norby stayed steady down the stretch on Tuesday in the St. Mary’s Invitational at The Dominion Country Club.

Norby’s reward was his fourth collegiate title, as he held off Emilio Gonzalez of St. Mary’s (Texas) by two shots. Norby posted a 2-over-par 74 to close at 2-under 214 for the three-round tournament, while Gonzalez – the leader entering the day – shot a 77.

No. 6-ranked OC just missed what would have been its fourth tournament title of the 2019-20 season, as No. 10 St. Mary’s – playing in its backyard – rallied over the final nine holes for a five-shot win over the Eagles. The Rattlers posted a final-round team score of 294 to close at 888, while OC posted a 301 and finished at 893. It was OC’s second runner-up finish of the season, to go with its three wins.

Norby, a senior from Carlsbad, Calif., seized the lead on the first hole, as he birdied the par-4 No. 1 while Gonzalez bogeyed. Gonzalez also bogeyed the par-4 No. 2 and while he struggled somewhat on the front nine, Norby stayed consistent while building a five-shot lead after eight holes on the 6,937-yard course.

But Norby’s lead shrank as he endured a rough patch, with bogeys at No. 10, No. 11 and No. 12 allowing Gonzalez to pull within two shots. But Norby steadied himself with three straight pars and sealed his win with a birdie at the par-5 No. 18. It was his tournament-leading 15th birdie.

All of Norby’s collegiate wins have come since last March, with the most recent before Tuesday happening at the Jerry Hrnciar Invitational at The Territory Golf and Country Club in Duncan last October. OC golfers have won 65 tournaments since the program was revived in 1997.

Norby is the seventh golfer in program history to win as many as four tournaments and that list is a Who’s Who of OC golf, with three OC Athletic Hall of Famers (Bruno Buccolo, Juan Lizarralde and current PGA Tour member Rhein Gibson) and three who likely will be someday (Sam Johnston, Axel Ochoa and Oscar Stark).

OC’s second-highest finisher Tuesday was freshman Mateo Pulcini, who posted a 77 and tied for 14th in the 71-man field at 225. One shot back, tied for 18th after a 75, was junior Andres Brictson.

The Eagles will return to action starting Sunday in the Las Vegas Desert Invitational, a three-day event to be played at Royal Links Golf Club’s Links Replica Course. Missouri-St. Louis will be the tournament host.

Weck had SWOSU’s low round of the tournament with a 1-under 71 in the second round and he finished tied for ninth at 8-over par for the tournament. Anders Strand was three shots behind him and tied for 21st after shooting an even-par round of 72 on Tuesday. Conner Boydston had two rounds in the 70’s on Monday but was out of the scoring in the final round as Heston Brown and Kason Cook had scores of 76 and 79, respectively, that counted towards the team score.

With a team total of 906 strokes in the event, SWOSU finished in sixth place, three shots behind Texas A&M-International for fifth and 18 shots behind tournament champion St. Mary’s. SWOSU returns to action on March 16-17 at Oak Tree Country Club in Edmond as they compete in the UCO Classic.

Northeastern State slipped three spots to finish in tenth place. The RiverHawks struggled to find consistency on The Dominion Country Club and shot the second-highest score with a 31-over, 319 score.   After three rounds of play, they finished with a 922 (304-299 on Monday), 33 shots back of the lead.

Grant Hynes paced NSU with a 228 and shot an 80 in the final round.  Hynes would finish tied for 25th on the leaderboard.