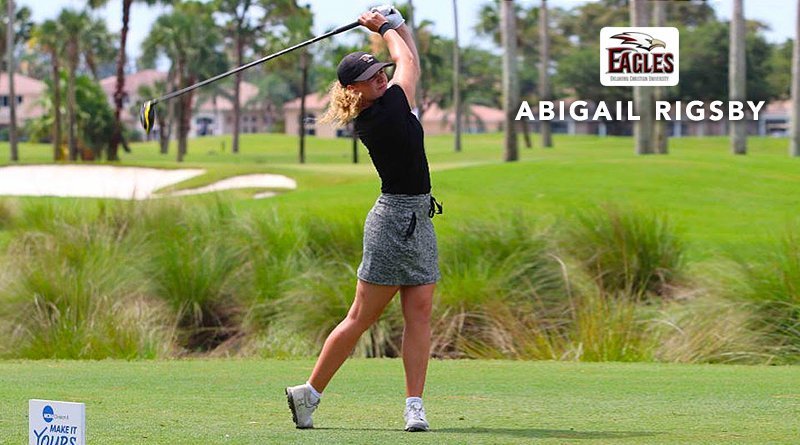 PARKVILLE, Mo. (July 24, 2019) – While almost every player struggled Wednesday at The National Golf Club of Kansas City, Abigail Rigsby held it together and shot back up the leaderboard as a result.

In the final round of the Prairie Invitational, the rising senior at Oklahoma Christian fired a 1-over-par 73 – the second-best score of the day on the 6,189-yard course – to jump into a tie for fourth in the prestigious amateur tournament.

Rigsby, from Courtenay, British Columbia, held a share of the lead after an opening-round 74 on Monday, but posted an 81 in the second round Tuesday to fall back to 15th place in the 82-woman field. Still, that was good enough to make the cut and she redeemed herself Wednesday, offsetting double bogeys on the par-4 No. 1 and the par-5 No. 18 with five birdies, the most of any player in the field.

She finished at 12-over 228 for the tournament, five shots behind the winner, Oral Roberts University sophomore Sarah Bell, whose 71 was the only Wednesday round better than Rigsby’s. Bell won by two shots over University of Kansas junior Sera Tadokoro, with former Kansas State golfer Whitney Bell third, one shot ahead of Rigsby. Another Kansas golfer, rising junior Aristelle Acuff, tied with Rigsby for fourth.

The Prairie Invitational, formerly known as the Women’s Amateur of Kansas City, is a 54-hole premiere women’s event in Kansas City for amateur and professional players. Its purpose is to enhance women’s golf and junior women’s golf not only in the Kansas City area, but on a regional level.

Rigsby – a three-time collegiate winner at the NCAA Division II level and a three-time All-Heartland Conference selection – hadn’t initially intended to play in the event, having planned instead to play in the Women’s Oklahoma Golf Association State Amateur Championship, which also began Monday.

But after initially telling Rigsby she’d be eligible to play in that event, WOGA informed her several weeks later she wouldn’t be able to after all, because she isn’t an Oklahoma resident. That left Rigsby looking for a tournament in which to play this week and she landed in the Prairie Invitational. She’ll play next month in the Kansas Women’s Amateur Championship and will also try to qualify to be the first female contestant in the Oklahoma Open.