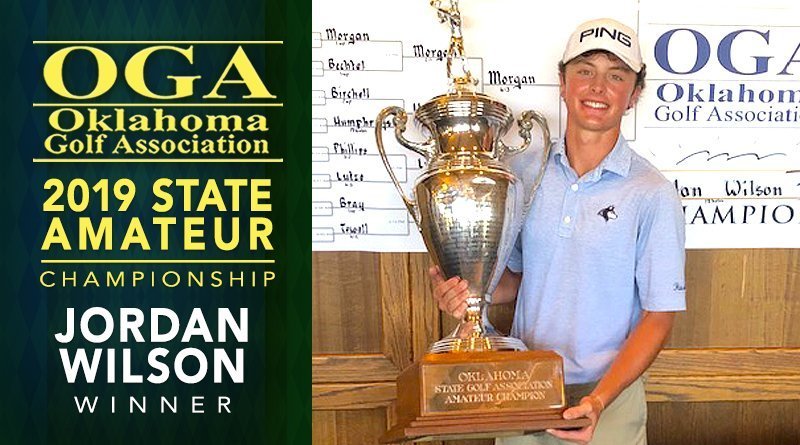 EDMOND – Jordan Wilson was thrilled just to be facing one of his boyhood idols Austin Eckroat in the final match of the Oklahoma State Amateur Championship at Oak Tree National.

To take the two-time collegiate All-American down and put his name on a trophy that dates back to 1910 was more than he dreamed a week ago. Or maybe not.

“I play with Austin out here sometimes and when I knew we were playing in the finals I was actually relaxed,” Wilson said. “I was just going to play my game and see what happened. I knew if I played really well and he wasn’t at his best I would have a chance.”

That’s exactly what happened, as the rising junior and 2019 Class 6A state champion at Edmond North made a series of improbable up-and-downs from off the difficult greens at Oak Tree National to build a two-up lead with four to play. Eckroat, who has not lost a match in the match play portion of the NCAA Championship the past two years, came back to force a tie by winning holes 15 and 16 and the two both made pars on 17 and 18 to force extra holes.

Wilson striped his drive on the first playoff hole setting up a routine par. Eckroat missed the green to the right and left his chip shot 15 feet short and missed the par putt. He settled for the runnerup spot for the second consecutive year, having lost in the finals to OSU teammate Hayden Wood in 2018.

Eckroat, who will anchor the OSU team in the fall, stood to gain some ground in the World Amateur Golf Rankings had he won, bolstering his bid for a spot on the 2019 Walker Cup Team. He has the upcoming Western Amateur and U.S. Amateur to help secure a spot.

“Jordan played really well and congratulations to him,” Eckroat said. “We play together quite a bit and he’s a good player but I hadn’t seen him in tournament conditions. He made a lot of good birdie putts and par-saving putts.”

Wilson took the lead on the first hole when Eckroat made bogey and never trailed. He made three birdies on the front nine but the match was still tied after Eckroat stuffed his approach to two feet on the par-4 10th. Wilson made an outstanding bunker save on the 12th hole and another clutch par putt on the par-3 13th while Eckroat bogeyed both to fall two down.

After Eckroat rolled his long birdie effort on the par-3 17th to within a few inches, Wilson splashed out of the bunker short and right of the green and left himself about 7 feet for par. Again, he made the par saving putt.

“I actually had a longer putt on the same line in my first match today and knew how it would break,” Wilson said.

“To have my name on this trophy with so many great players and so many years of history is very special,” said Wilson, who moved to Oklahoma in 2013, the year Eckroat won the first of his two individual Class 6A state titles for Edmond North as a freshman. “To win it against Austin, who I’ve been following all his accomplishments for years, is even more special.”

Wilson is the first high school player to win the state amateur championship since Colton Staggs in 2009. He was followed in some of his earlier matches by OSU coach Alan Bratton and said that he is interested in becoming a Cowboy but has not decided on his collegiate destination.

Wilson advanced to the finals with a 2 and 1 victory over former University of Oklahoma Sooner Ben Klaus, now 30 and working in the insurance field. Eckroat defeated Luke Morgan of Guthrie, the Class 5A state champion and recent participant in the U.S. Junior Amateur, 5 and 4 in the other semifinal.

“I wanted to play against Austin because to win this you want to play the best,” said Morgan, who has committed to play for Mike McGraw at Baylor. “I was just driving it a little too wild today to have a chance.”

Note: Eckroat is a roommate with former teammate Viktor Hovland who is now at Oak Tree National member and was at the club playing a practice round Wednesday. He said the instant success of Hovland and Matthew Wolff, who has also been a frequent guest at Oak Tree, is inspiring.

“It gives you both hope and confidence that you can do the same when it’s your turn.” Eckroad said. “And I’m really happy for both of them.”


Eckroat’s ball striking was at a PGA Tour level in the three days of match play but his putting left something to be desired.

“I didn’t make a putt in the whole tournament,” he said. “Sometimes I hit it so close that they gave it to me.”

That is at least a slight exaggeration. Eckroat made a 17-foot par-saving putt to win the 15th hole and a 13-foot birdie putt to halve the seventh hole but otherwise not much went in for the OSU junior, who will be the only returning starter for the Cowboys this fall.

“We’re going to be all right and surprise some people,” he said.