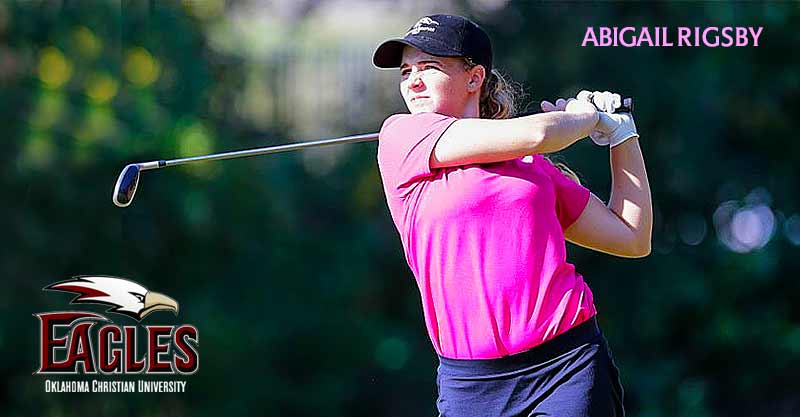 DENTON, Texas (Sept. 22, 2020) – Overcoming wet playing conditions, two Oklahoma Christian golfers moved up in the field and another secured a top-10 individual finish on Tuesday during the final day of the Dallas Baptist Classic at Wildhorse Golf Club at Robson Ranch.

All four OC players in the season-opening event – which finished in a light mist that fell most of the round – competed as individuals, with senior Abigail Rigsby of Courtenay, British Columbia, leading the way for the Eagles. Rigsby shot an 80 and tied for sixth at 221 (5-over-par) in the three-round event, which was her first collegiate tournament since the NCAA Division II Championship in May 2019.

Junior Shaley Goad of Wheeler, Texas, finished 22nd in the 58-woman field at 13-over 229 after posting a 4-over 76 on the 6,183-yard course, the best of any of OC’s golfers on Tuesday. Goad’s round included two birdies.

Alexandria Bennett, a sophomore from Plano, Texas, moved up three spots to finish 32nd, with her 77 leaving her at 236 (+20). Freshman Alyssa Wilson of Yukon, Okla., also jumped three spots for a 45th-place finish at 30-over 246, shooting a final-round 81.

Dallas Baptist’s Olivia Mitchell was the individual champion, finishing at 12-under 204.

OC’s next tournament will be the West Texas A&M Fall Invitational, a 36-hole event that will be played Oct. 5 at Tascosa Golf Club in Amarillo, Texas.