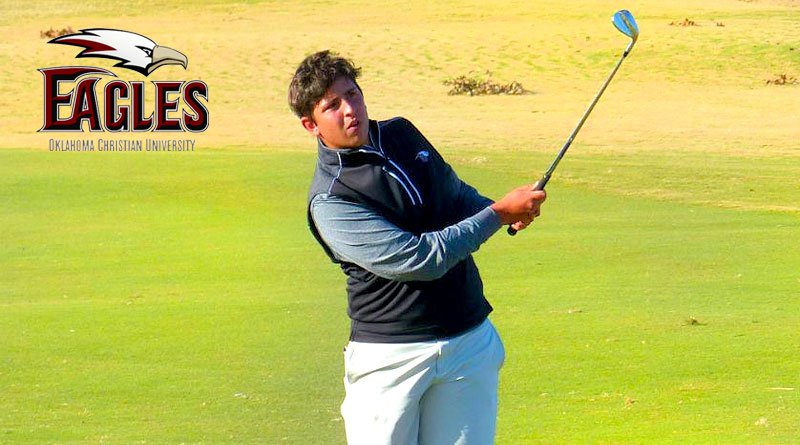 Photo: Mateo Pulcini was tied for 12th after the first day of the St. Mary’s Invitational.

SAN ANTONIO (Feb. 24, 2020) – Up and down the leaderboard went Oklahoma Christian for most of the day Monday in the St. Mary’s Invitational at The Dominion Country Club, as the sixth-ranked Eagles jockeyed for position.

At day’s end, they were where they’ve been a lot this golf season – leading the way, but knowing a fierce battle awaits in the tournament’s final round. OC posted team rounds of 298 and 294 to stand at 592, but almost half of the squads in the 13-team field remain within easy striking distance.

The Eagles will start Tuesday two shots ahead of No. 10 St. Mary’s (Texas), three ahead of Texas A&M International, St. Edward’s (Texas) and West Texas A&M and four ahead of Western New Mexico. Northeastern State and Southwestern Oklahoma State are just 11 shots back, with No. 19 Midwestern State (Texas) lurking just behind them.

Trevor Norby, a senior from Carlsbad, Calif., led the way for the Eagles, posting two rounds of 2-under-par 72 on the 6,937-yard course. At 140, he was second place in the 71-man field, one shot behind fellow All-American Emilio Gonzalez of St. Mary’s. Norby posted a whopping seven birdies in the second round and a tournament-leading 12 over the two rounds.

Sophomore Alejandro Armijo was 52nd at 157 after shooting a 78 and 79. Playing as an individual on a course not far from his hometown of Schertz, Texas, OC junior Reese Gorman fired rounds of 90 and 78 and was tied for 67th at 168.

The Eagles will be grouped with golfers from St. Mary’s and Texas A&M International for the final round, which will start at 8 a.m. Tuesday. OC has won three of its four previous tournaments against Division II competition this season and was second in the other.

Northeastern State flirted with the top spot on the leaderboard early but slipped to seventh place after two round.

The RiverHawks carded a 304 in the morning round and improved their score by five in their second go-around on the Dominion Country Club.  Grant Hynes, in his third tournament of the season, carded the team’s low score with a 148 (75-73) and is tied for 12th place overall.

Steady rounds by Hynes and Hunter Pennington in the opening 18 pushed NSU to the top of the leaderboard for part of the morning. The team would slip at the end of the round with the RiverHawks carding a five-over in the final three pins. NSU would shoot an 18-over and were tied for fifth on the leaderboard.

In the afternoon, the RiverHawks stuck around mid-pack tied with Southwestern Oklahoma and 11-shots back of Oklahoma Christian, who leads the field by two.