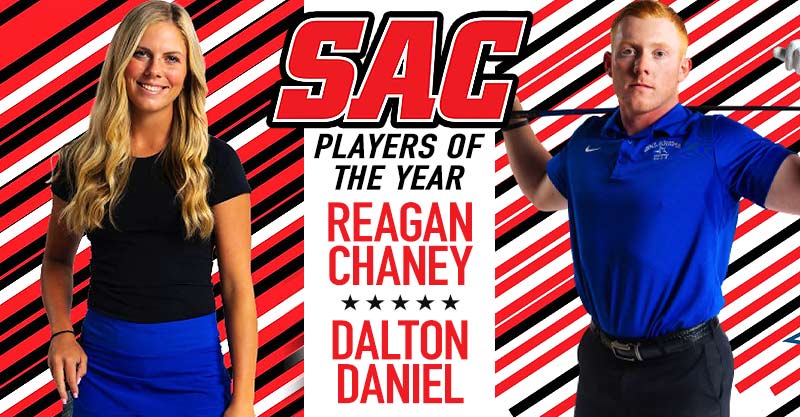 Oklahoma City, top-ranked in the NAIA, hauled in each of the conference’s major accolades as Maddi Kamas grabbed SAC freshman of the year and Marty McCauley landed coach of the year. Natalie Gough and Paige Wood of the Stars nabbed all-conference acclaim as well.

Chaney has forged a 72.55 scoring average in 29 rounds to rank among the top five in the NAIA this season. Chaney, a freshman from Ardmore, reeled in three wins, three runner-up showings and eight top-five finishes in her debut season in college. Chaney, a four-time conference golfer of the week, has shot rounds below 70 eight times, delivering the finest round (34-30–64), the best 36-hole (64-69–133) and top 54-hole scores (70-68-67–205) in OCU women’s golf history. She has set the program record for birdies in a season (92) and is on pace for the top single-season stroke average by a Star.

Kamas has turned in 73.07 strokes per round, ranking in the top five nationally on the season. Kamas, a freshman from Kingfisher, owns three wins, eight top-five showings and two rounds below 70 this season. Kamas became the SAC individual champion with a 71-73-71–215. Kamas has landed three SAC player of the week nods and NAIA golfer of the week for March 28-April 3.

Gough owns four all-SAC honors, three all-tournament accolades in the SAC Championships, four conference player of the week nods and three SAC player of the year awards in her career. Gough, a senior from Bixby, Okla., gives OCU three golfers among the top five in the country in stroke average with 73.76 shots per 18 holes in 29 rounds. Gough has recorded eight top-five finishes with her third career win in the Coqui Classic on Nov. 1-2 in Rio Grande, Puerto Rico. Gough’s career scoring average of 75.54 in 89 rounds ranks third in OCU annals.

Wood has produced a 75.45 scoring average in 29 rounds. Wood, a freshman from McKinney, Texas, has three top-five finishes and a win in the Las Vegas Shootout on Feb. 21-22 at Boulder Creek Golf Club in Boulder City, Nev.

The NAIA Championships will be contested May 24-27 at Lincoln Park Golf Course in Oklahoma City.

Daniel of Stars becomes SAC Golfer of the Year

The SAC’s other 2021-22 awards went to Oklahoma City’s Dylan Teeter (SAC freshman of the year) and Southwestern Christian’s Daren Reed (coach of the year).

Daniel has produced a 71.92 stroke average through 25 rounds, ranking in the top 15 in shots per round this season. Daniel, a senior from Newcastle, Okla., seized three wins in a row earlier this season among five top-five finishes as well as seven rounds below 70 in 2021-22. Daniel has landed three SAC golfer of the week honors on the season. Daniel became a two-time all-conference performer and two-time all-tournament in the SAC Championships in his OCU career.

Teeter has posted a 72.40 scoring average in 25 rounds to rank among the top 25 in the NAIA in 2021-22. Teeter, a freshman from Bixby, Okla., has taken five top-five finishes on the season. Teeter collected his first career win in the SAC Championships with a 69-68-71–208 at The Territory Golf & Country Club in Duncan, Okla. He was SAC player of the week for March 21-27.

Reed directed Southwestern Christian to five wins and two second-place showings among 11 tournaments in his first season as head coach. The Eagles own the 17th spot in the NAIA top 25 and have been included in the rankings five out of the six polls this season.