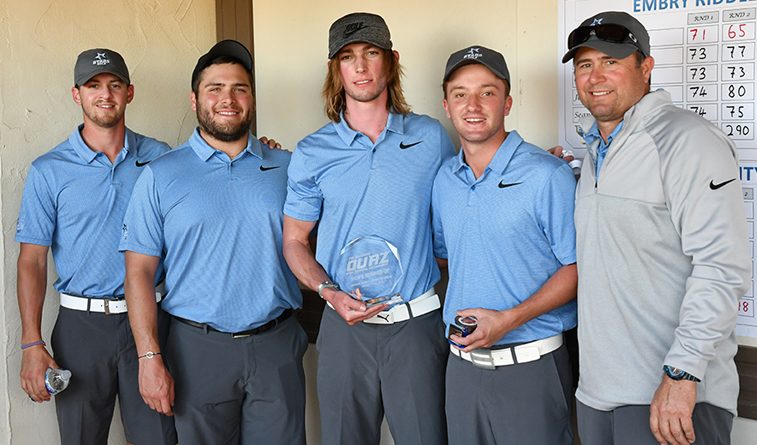 LITCHFIELD PARK, Ariz. – David Meyers of Oklahoma City University shot a final round 67 to keep hold of his top spot on the leaderboard and earn his first individual crown of the season Tuesday afternoon in the Ottawa-Arizona Spring Invitational at the Wigwam Golf Resort.

Meyers, a sophomore from Johannesburg, South Africa, finished the tournament with a 67-66-67–200, five strokes ahead of teammate Rupert Kaminski, who posted a 68-67-70–205 for second place. The Stars, ranked No. 2 in NAIA men’s golf, took second after finishing with a 276-278-282–836, one stroke behind top-ranked Texas Wesleyan. The runner-up finish was just OCU’s second of the year, both times losing out to Texas Wesleyan.

With the win, Meyers collected his first top-five finish since placing fourth in the U.C. Ferguson Classic on Sept. 12. Kaminski, a junior from Johannesburg, South Africa, has placed in the top five of all five tournaments this season.

Peri’Don Castille, a sophomore from Dallas, came in eighth for the Stars after shooting a 73-70-72–215. Two strokes behind him was Oklahoma City’s Garrison Mendoza, who took 12th. Mendoza, a senior from Clinton, Okla, turned in a final score of 69-75-73–217. Mendoza was one of seven players to shoot a sub-70 round in the tournament.

Also competing for OCU was Carson Seals, who finished with a 72-75-75–222 in his season debut for the Stars.

Temperatures began in the high 50s and rose to the mid-70s with light winds hovering around four mph. The tournament played under clear skies all day Tuesday with no precipitation.

Oklahoma City returns to the links on Feb. 26-27 in the San Antonio Shootout at TPC San Antonio.