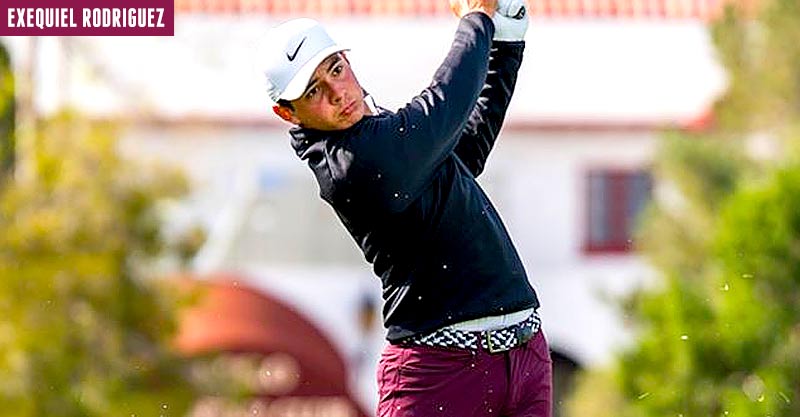 PUEBLO, Colo. (May 7, 2022) – Since it began competing in NCAA Division II, Oklahoma Christian had endured more than its fair share of postseason heartbreak in men’s golf. On Saturday, the Eagles finally had something to celebrate – a long-awaited return trip to the national tournament.

Freshman Exequiel Rodriguez drained a 15-foot bogey putt on the final hole to close a 3-under-par 68 and clinch fourth place – by one shot – for OC in the Division II South Central-West Super Regional at Pueblo Country Club. That earned the Eagles the final bid out of the Super Regional into the NCAA Division II Championship, set for May 16-20 at TPC Michigan in Detroit.

It will be OC’s second trip to the Division II national event and its first since 2016, the first season in which the Eagles were eligible. Subsequent seasons have ended at the regional stage in 2018, 2019 and 2021, and there was no tournament held in 2020 due to the COVID-19 pandemic.

OC started the 54-hole Super Regional slowly, finishing the first round in 11th place among 20 teams. The Eagles zipped up into a tie for fifth place in Friday’s second round, but found themselves one of four teams battling Saturday for what realistically was one spot at nationals, behind Colorado State-Pueblo, Colorado Mesa and Midwestern State (Texas).

Throughout the final round, the Eagles hovered around the cut line. After a fast start, they moved within three shots of third place, but just past the midway point of the round, they fell into fifth place, two shots behind Stanislaus State (Calif.), which entered the day tied with OC.

When Stanislaus State – the first-round leader – finished, it was with a final-round score of 282 (2-under). OC, in the next group of teams behind the Warriors, was at 3-under for the day at that point, meaning the Eagles needed to play the final three holes at even par. They did, just barely.

Rodriguez, from Buenos Aires, Argentina, anchored the Eagles’ lineup. He parred No. 16, then put OC in strong position with a birdie at No. 17. But he found trouble on No. 18 and faced a long bogey putt. A miss would have forced OC into a playoff with Stanislaus State, but Rodriguez made it, prompting cheers from the OC contingent surrounding the hole.

OC’s team score of 281 – the best of any team on Saturday – put the Eagles at 848 for the tournament and allowed the Eagles to somewhat close the gap on the other top-four finishers. Colorado State-Pueblo won at 845, with Midwestern State and Colorado Mesa tying for second at 846.

Also tied for 42nd was freshman Oskari Nikku of Tuusula, Finland, who shot a 72 on Saturday. Brictson tied for 59th at 218, also finishing with a 72.

California State-San Marcos’ Matthew Pennington finished at 204 and took medalist honors after winning a four-hole playoff with Midwestern State’s Garrett Leak. Pennington and Liam Allder of California State-Monterey Bay (who finished third at 206) earned the two individual spots into the national tournament out of the Super Regional.