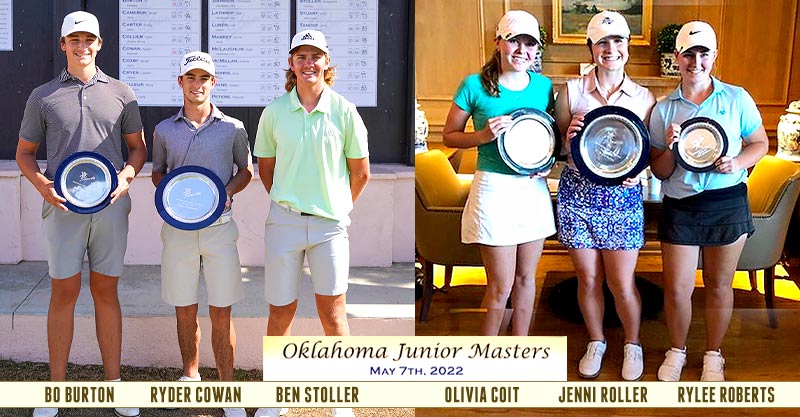 Jenni Roller walked into the mixed grill at Southern Hills following her round in the Oklahoma Junior Masters Saturday, and the entire room of contestants and parents broke into a round of spontaneous applause.

It was a heartfelt gesture of respect and admiration. Roller, who shot a state high school championship record 62 in the first round of the Class 3A tournament at Lake Murray State Park Golf Course earlier this week, had just slain a much more formidable dragon. She shot a 7-under 66 on the course that in less than two weeks will be hosting the 2022 PGA Championship.

The remarkable round was good for a six-shot victory over Olivia Coit of Edmond, who shot 1-under 72, while newly crowned Class 6A champion Rylee Roberts of Edmond shot even-par 73 for third. The girls played holes 1 and 18 as par-5s along with normal par-5s 5, 13 and 16.

On the boys side, Ryder Cowan of Edmond made a nifty up-and-down on the final hole to shoot even-par 70 and edge Ben Stoller of Owasso and Bo Burton of Edmond by a single shot. Cowan rallied late with birdies on 16 and 17, where he drove the green on the par-4. Stoller had his par putt on 18 horseshoe around the hole to wind up trailing by one.

For those who played well and no so well, playing the PGA Chhampionship venue in full regalia with fairways lined with tents and grandstands and in immaculate condition was a huge treat.

Morri Rose, director of the Oklahoma Junior Golf Tour, asked several of the younger players how they were faring as they walked up 18. More than one said they were playing terrible, but having the time of their life.

Stoller, despite the disappointment of the three-putt on 18, echoed the same thought.

“It was just awesome to get to play here right before the PGA with it all set up,” he said. “It was really great of Southern Hills to let us do this.”

“The course is incredible, it was just an amazing experience,” said Cowan, the University of Oklahoma commit who was 2-under through 8 holes before making three bogeys in four holes.

Roller made short work of the 5 par-5s for the girls, making birdies on 1, 5 and 18 and eagles on holes 13 and 16. After bombing her drives on both, she hit 8-iron in from about 160 and then converted eagle putts of around 18 feet.

She also made birdies on holes 4 and 7 to offset bogeys on 2 and 8.

“I’m putting well and confident about my ball striking as well,” said Roller, who shot 93 the last time she played Southern Hills, in this same tournament in its inaugural event two years ago. “It was really nice of them to have us. I wanted to do a little better than that 93.”

Another highlight for the girls was a hole-in-one by Aubrey House on the par-3 eighth hole, using an 8-iron from 134 yards.