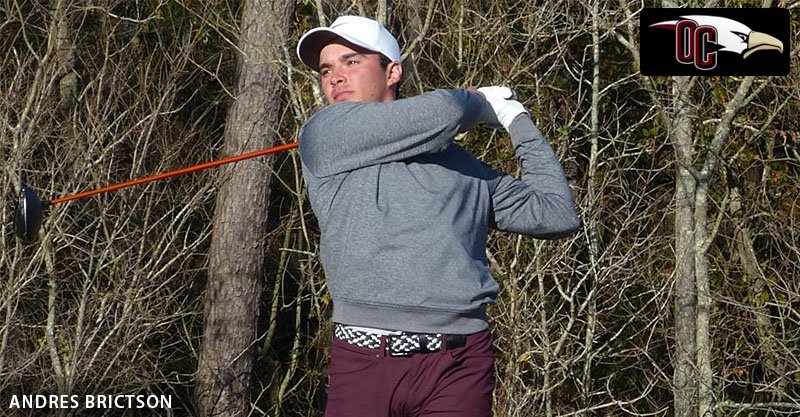 LAS VEGAS (March 7, 2022) – Posting the best team score of the day in one of the deepest tournament fields in NCAA Division II, No. 8-ranked Oklahoma Christian moved up three spots to third place on Monday after the second round of the Las Vegas Desert Classic at The Legacy Golf Club.

With none of OC’s players turning in a scorecard any worse than a 75, the Eagles recorded a team score of 295, putting them at 586 overall, seven shots behind tournament host Missouri-St. Louis and just two behind second-place St. Mary’s (Texas). The Eagles had started the round nine shots behind UMSL and tied for sixth place.

Helping OC’s cause considerably on Monday were birdies – the Eagles’ quintet combined for 19 of them on the 7,110-yard course, lifting the team’s total to a tournament-best 33. OC sophomore Mateo Pulcini has 11 birdies through two rounds, tops in the 96-man field.

Pulcini had six birdies on Monday, helping him finish at even-par 72 despite a quadruple bogey on No. 16. It was his second straight 72 and with a two-day score of 144, he will enter the final round four shots behind the leader, Kittiphong Phaithuncharoensuk of Texas A&M-Commerce.

Junior Alejandro Armijo of Rio Rancho, N.M., posted the Eagles’ second-best score of the round, a 73 that included four birdies. Freshman Exequiel Rodriguez had two birdies en route to a 75 and was tied with Armijo for 17th overall at 147.

Senior Andres Brictson of Merida, Mexico, was tied for 24th at 148, recording three birdies while shooting a 75. Tied for 47th at 152 after posting a 75 was freshman Oskari Nikku of Tuusula, Finland. Nikku recorded four birdies.

The final round will begin at 8 a.m. Pacific time (10 a.m. Central time) on Tuesday, with OC grouped with St. Mary’s and Missouri-St. Louis.