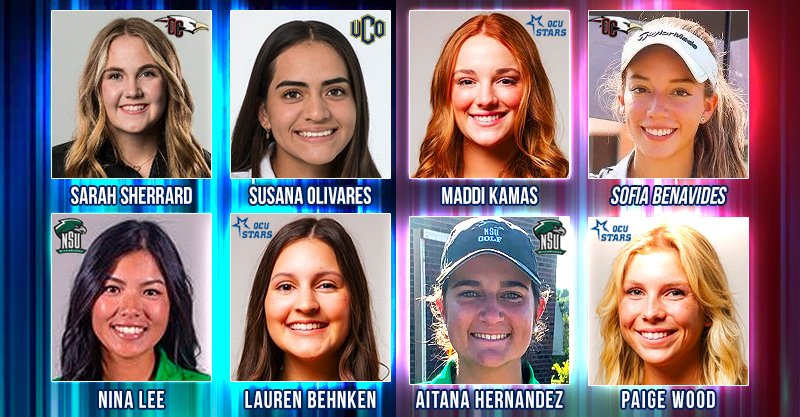 OKLAHOMA CITY (March 7, 2022) – Chilly temperatures didn’t seem to faze Oklahoma Christian’s women’s golf team much during its first round of the spring season.

Led by freshman Sofia Benavides Herberth’s 1-under-par 70, the Eagles soared to the first-round lead on Monday in the Diffee Ford-Lincoln Invitational, hosted by Southern Nazarene at Lincoln Park Golf Club’s West Course. The annual event usually is played at Kickingbird Golf Course in Edmond, which is closed for major renovations.

Playing conditions at Lincoln Park were difficult, with the temperature peaking at only 40 degrees and a strong north wind dropping wind chills into the upper 20s and low 30s. Tee times were delayed two hours due to a frost warning.

Still, OC posted a team score of 289 (5-over) to take an eight-shot lead over Northeastern State and Central Oklahoma, the latter of which finished one spot out of the most recent NCAA Division II coaches’ poll. The NAIA’s No. 1-ranked team, Oklahoma City University, stood fourth in the 15-team field at 302.

Benavides Herberth, a freshman from San Luis Potosi, Mexico, played steady golf, mixing in a pair of birdies (both on par-3 holes) with only one bogey and 15 pars on the 5,912-yard course. She stayed under par all the way after recording a birdie on her opening hole, No. 10.

Bennett, a junior from Plano, Texas, recorded three birdies en route to her 71 while Merenmies, a sophomore from Raasepori, Finland, posted five birdies, including three in a row near the end of her round on the par-4 No. 6, the par-5 No. 7 and the par-4 No. 8.

Freshman Sarah Sherrard of Moore was the Eagles’ No. 4 player on Monday, shooting a 77, good for a tie for 17th in the 85-woman field.

OC freshman Haley Blevins of Edmond and sophomore Alyssa Wilson of Yukon (who is competing in the tournament as an individual) each shot an 82 and were tied for 42nd. Two other Eagles also are playing as individuals – junior Sarah Harrison of Edmond and freshman Kaybre Wright of Cushing.

The final round is scheduled to begin at 9:30 a.m. on Tuesday, weather permitting.

A trio of top-10 individuals has Central Oklahoma in the hunt.  Susana Olivares shot a 1-over-par 72 and is tied for sixth in the medalist standings, while Kinsley Hall and Emma Shelley are tied for eighth after both opened with 73s. UCO also got a 79 from Mika Ramos and an 84 from Madison O’Dell.

All five of Northeastern State’s players are in the top-14 overall with Kaylee Petersen and Yasmin Hang scoring matching 73s.

The RiverHawks are tied for third with 53 pars, and third overall with ten birdies.

Nina Lee had 12 pars, tied for fourth most, and is 13th overall with a 75.  Aitana Hernandez and Marybeth Bellnap are a stroke behind Lee tied for 14th place.

No. 1-ranked Oklahoma City University is in fourth place.  OCU carded a 302 opening round, 13 strokes behind frontrunner Oklahoma Christian (289).

OCU has three golfers in the top-20 with freshman Maddi Kamas in a tie for second (71), freshman Reagan Chaney alone in 12th place (74) and senior Natalie Gough in a tie for 17th place (77).

OCU’s Blue team is ahead of four NCAA Division II schools in ninth place with a 321 card. Finishing for the Blue team were senior Lauren Behnken in a tie for 21st place (78), freshman Morgan Palermo in a tie for 25th place (79), senior Rachel Eckert in a tie for 32nd place (80) and freshman Meghan Charles in a tie for 54th place (84).