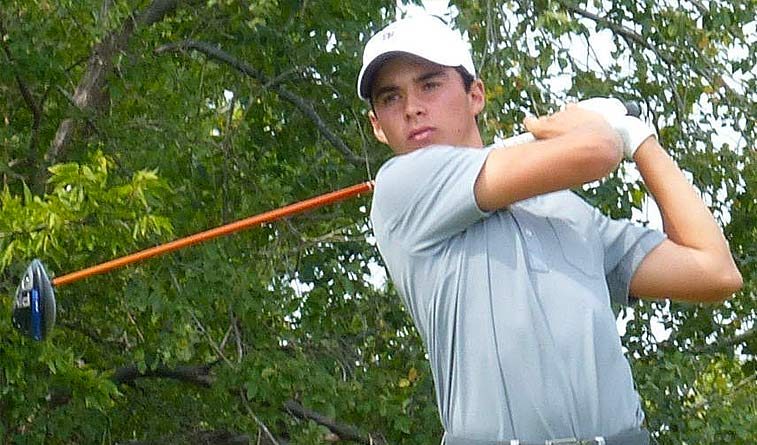 Photo: OC freshman Andres Brictson was tied for the lead after the first round of The Territory Classic.

DUNCAN, Okla. (Oct. 23, 2017) – Oklahoma Christian golfer Andres Brictson was tied for the lead and the Eagles were in second place in the team race after the opening round of The Territory Classic on Monday at The Territory Golf Club.

Brictson, a freshman from Merida, Mexico, fired a 1-under-par 71 to join a logjam atop the 80-man field that included Chris Eckes of Arkansas-Fort Smith, Dakota Clark of Oklahoma Baptist, Parker Holekamp of Texas A&M International and Hayden Foster of Southeastern Oklahoma State.

Southeastern Oklahoma State is tied for fourth with Newman, Southwestern OSU is tied for sixth with Oklahoma Baptist, Rogers State is in ninth and Cameron is 14th among other Oklahoma schools competing.

OC posted a team score of 5-over 293 and trailed first-round leader Midwestern State (Texas) by three shots in the 14-team event. Eight other teams were within nine shots of the Eagles.

Brictson was particularly effect on par-5 holes on the 7,077-yard layout, finishing 3-under over those four holes. He had four birdies on the day, the same as teammate Juan Pallach, who was one shot back of the leaders at 72.

Another shot back, tied for 11th at 73, was OC junior Cameron Brown. Another OC junior, Garrett White, shot a 77 and was tied for 44th, while junior Ethan Smith‘s 80 left him tied for 64th.

Playing as an individual, junior Grady Neal shot an 87.

The tournament’s final round will begin at 8:30 a.m. Tuesday. It is the final tournament of the fall season for OC.