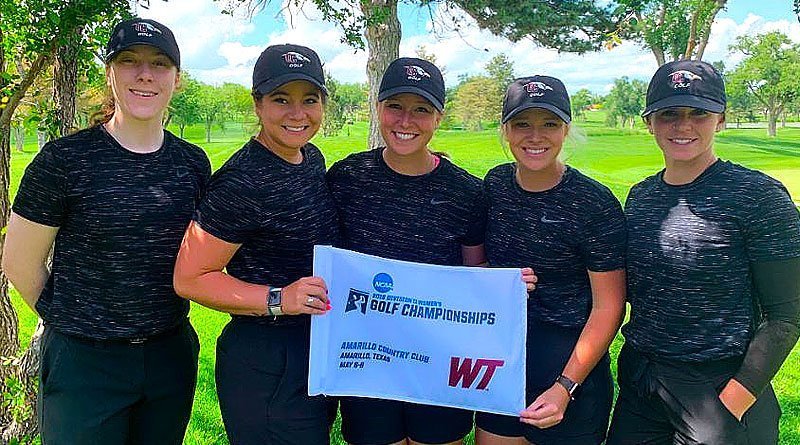 Photo: OC golfers (from left) Alexandria Bennett, Kate Goodwin, Elizabeth Freeman, Shaley Goad and Abigail Rigsby celebrate after finishing fourth at the West Super Regional on Wednesday and qualifying for the NCAA Division II Championship.
Complete results:
AMARILLO, Texas (May 8, 2019) – Oklahoma Christian entered the final round of the NCAA Division II West Super Regional on Wednesday with a seemingly safe 10-shot cushion to qualify for the Division II Championship, but the Eagles frittered that away by midway through the round.Suddenly on the outside looking in, the Eagles rallied to regain fourth place – and the final qualifying spot for the national tournament – by playing their final nine holes at Amarillo Country Club in a sizzling 1-over-par.

Led by top-10 individual finishes by Kate Goodwin and Shaley Goad, No. 18-ranked OC closed with a final-round team score of 300 and an overall score of 895, holding off No. 16 Academy of Art (Calif.) by four shots for fourth place.

Thus OC will make its first team appearance at the Division II national tournament since becoming eligible in 2016. The Eagles have had an individual national qualifier in 2016 (Audrey Meisch), 2017 (Abigail Rigsby) and 2018 (Goodwin), but now the quintet of Goodwin, Goad, Rigsby, Elizabeth Freeman and Alexandria Bennett will get to play together in the final event of the Division II golf season.

The Eagles will join 15 other squads – including fellow Oklahoma teams Northeastern State and Southwestern Oklahoma State – for the Division II tournament at PGA National Resort’s Champions Course in Palm Beach Gardens, Fla. The 72-hole event will start next Wednesday.

It will be the fifth national-tournament appearance in the eight-year history of the OC program. The Eagles qualified for the NAIA Championship in their debut season of 2011-12 and played in the National Christian College Athletic Association Championship tournaments in fall 2012, fall 2013 and fall 2014 while in transition from the NAIA into NCAA Division II.

OC led this year’s Super Regional after round one and still was tied for the lead with No. 2 Dallas Baptist (Texas) when severe weather halted play on Tuesday with the teams on the back nine of the 6,436-yard course. They finished the second round Wednesday morning and OC still was in second, 10 shots ahead of Academy of Art, which was fifth.

But the Eagles, who started the final round teeing off No. 10, played their first nine holes in 15-over and found themselves two shots behind Academy of Art, which played the same holes in 3-over.

On the front nine, though, the Eagles limited their bogeys and threw in some red numbers. Rigsby, a junior from Courtenay, British Columbia, birdied the par-4 No. 1 and the par-4 No. 4 and finished those nine holes 2-under. Bennett, a freshman from Plano, Texas, who’s OC’s No. 5 player, didn’t have a bogey, playing those nine hole at even par. They helped OC rebuild a four-shot cushion.

There were a few tense moments near the end, as Goad and Goodwin each recorded a bogey on the par-4 No. 17, but Academy of Art wasn’t able to take advantage.

Dallas Baptist won the team title with a score of 886, while No. 8 (and tournament host) West Texas A&M was second in the elite 12-team field at 890. No. 4 California State-San Marcos took third at 894, one shot ahead of the Eagles.

Among the teams finishing behind OC at the Super Regional were No. 15 St. Mary’s (Texas) and No. 22 St. Edward’s (Texas).

Individually, Goodwin and Goad tied for eighth in the 66-woman field at 221 (8-over). Goodwin, a senior from Tulsa who was the Super Regional co-medalist last year at Hillcrest Country Club in Durango, Colo., closed with a 5-over-par 76. Goad, a sophomore from nearby Wheeler, Texas, posted her sixth top-10 finish of the season after a final-round 75.

The four individual national qualifiers from the Super Regional were Anahi Servin of Academy of Art, Kylie Jack and Jaya Rampuri of Simon Fraser (British Columbia) and Megan Daleo of Sonoma State (Calif.).