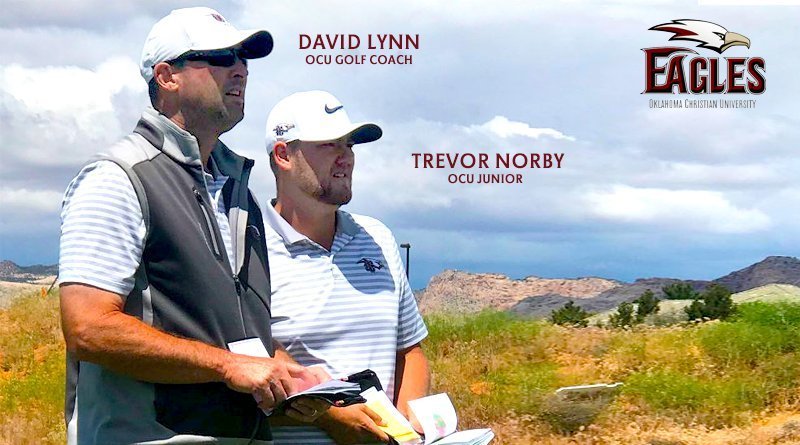 ST. GEORGE, Utah (May 9, 2019) – Oklahoma Christian didn’t play its best round on the opening day of the NCAA Division II South Central-West Super Regional, but the Eagles did enough to stay in contention at The Ledges Golf Club.

Led by a 2-under-par 70 from senior Juan Pallach, the 12th-ranked Eagles posted a team score of 293, putting them 10 shots behind tournament host and leader Dixie State (Utah) and in a tie for seventh with No. 23 Midwestern State (Texas) in the 20-team field.

OC was only six shots behind second-place California-San Diego and No. 13 Sonoma State (Calif.) and three shots behind the fourth-place team, St. Edward’s (Texas), important because the top four teams will advance to the NCAA Division II Championships later this month in Daniels, W.Va. The Eagles, who finished the round ahead of five other ranked teams, are seeking their first national-tournament berth since 2016.

Pallach, from Mexico City, twice recorded consecutive birdies – once on the front nine, once on the back nine – while shooting his 70, which put him in a tie for ninth in the 108-man field. Everyone was chasing Ben Constancio of St. Edward’s, who recorded a whopping 10 birdies en route to a 66 on the 7,145-yard course.

Like Pallach, OC junior Trevor Norby of Carlsbad, Calif., had four birdies but finished with a 74, the same as teammate Garrett White of Lindale, Texas. That put them in a tie for 34th. Senior Cameron Brown of Jacksonville, Texas, shot a 75 and was tied for 46th. Sophomore Andres Brictson of Merida, Mexico, who has won two of his last three tournaments, fired a 77 and was tied for 74th.

OC played in the afternoon wave of teams on Thursday and will switch to the morning wave for Friday’s round. The Eagles will tee off at 8:30 a.m. Central time, grouped with No. 9 St. Mary’s (Texas) and No. 5 Chico State (Calif.).