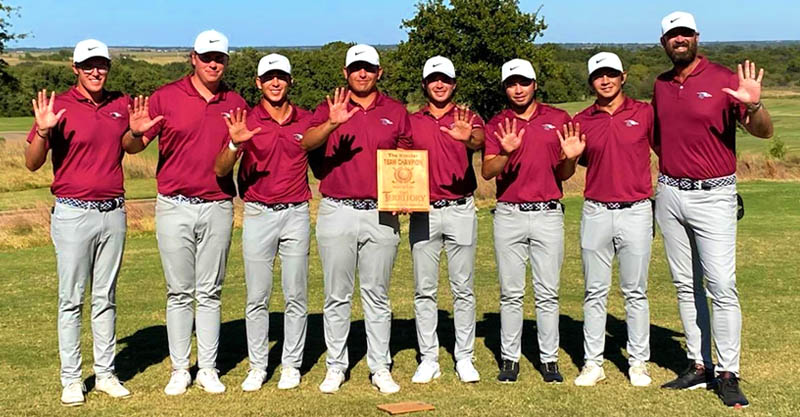 DUNCAN, Okla. (Oct. 19, 2021) – “Firsts” are rare for a program that has accomplished as much as Oklahoma Christian’s has the past 22 seasons, but the Eagles recorded one on Tuesday at The Territory Golf and Country Club.

For the fifth straight year, OC – ranked No. 11 in NCAA Division II – won the tournament hosted by Cameron that’s now known as The Hrnciar, pulling away in the final round for a 13-shot victory over No. 18 Texas A&M-Commerce, with No. 19 Midwestern State (Texas) another six shots behind TAMUC, third in the 10-team field. Host Cameron finished fourth.

Coach David Lynn‘s Eagles now have won 76 tournaments in program history. Before Tuesday, they’d won four straight titles in only two events – The Hrnciar and the spring Sleep Inn and Suites Classic, from 2005 to 2008 at River Oaks Golf Club in Oklahoma City.

OC closed its current fall season with three tournament wins, along with a fourth-place finish in a 17-team tournament hosted by Arkansas State that otherwise included all Division I schools. The Eagles didn’t lose to a Division II opponent all semester.

The Eagles almost picked up what would have been a third individual title of the fall, but Mateo Pulcini’s rally from eight shots down to start the round fell just short. Even so, his even-par 72 lifted the Rio Cuarto, Argentina, sophomore into a second-place finish in the field of 60 at 217 (1-over), three shots behind Tripp Wallace of TAMUC.

Wallace began the day with a six-shot lead over the second-place golfer, with Pulcini even further back in fifth. But Pulcini birdied three of the first seven holes and steadily narrowed the gap, closing within a shot of Wallace late in the round before Wallace birdied the par-3 No. 17 while Pulcini recorded a double bogey. Pulcini recorded his second top-two individual finish of the semester, having recorded his first collegiate win last month in the Missouri Southern Fall Invitational.

OC began Tuesday with a two-shot lead over TAMUC, but fast starts by Pulcini and senior Andres Brictson of Merida, Mexico – who birdied the first three holes on The Territory’s 7,110-yard layout – widened the Eagles’ advantage and neither the Lions nor Midwestern State made a serious run after that. OC posted a final-round team score of 293 to finish at 876 for the tournament.

Another freshman, Exequiel Rodriguez of Buenos Aires, Argentina, shot a 77, while junior Alejandro Armijo posted a 75 that included three birdies, one on a nifty chip-in from in front of the green on the par-3 No. 13. Both finished tied for 10th at 222 (+6).

Two OC players competed as individuals in The Hrnciar. Freshman Oskari Nikku of Tuusula, Finland – playing in his first collegiate event – tied for 50th at 237 after a final-round 83, while sophomore Chase Gardner of Snohomish, Wash., posted a 78 and placed 57th at 244.

OC will announce its schedule for the spring semester during the coming weeks.

In the final round, the Aggies carded a 305, their highest score of the event by seven strokes while battling the less than ideal winds. Their 897 ended up being 21 back of the tournament winner Eagles.

Freshman Hamish Murray recorded his best finish of his young Cameron career, carding a 75 in the final round to place third with a three-round score of 219. The Aussie was on pace to post an under-par round (1-under on 14), but bogeyed the final four holes, which proved to be rough for all participants on Tuesday.

Tyler Kaman also had a 75 in the final round, totaling 229 to finish just outside of the top-20 players individually. He was just two strokes back of first-year Aggie Trevor Mierl, who carded a 78 on Tuesday, as did Joey Kirk, who placed 17th with a 226. Devin Whipple rounded out the lineup with a countable 77 in the final 18, giving him a 232 for the event.

Preston Holmes was the top individual participant in the field, shooting 224 after adding a score of 74 in the final round. He finished in a tie for 13th place, while Hunter Drotts had the best score by any CU player on Tuesday (73) to finish with a 231 and a tie for 26th. Donovon Osborne added an 80 to his total score, which ended up being a 238 at the Territory.

Statistically, Drotts had one of the top par-5 scores, shooting five-under for the tournament thanks to his eagle he made on hole two on Tuesday. Murray was second in the field with 12 birdies, while Holmes was second with 38 made pars.

Cameron’s fourth tournament of the fall marks the beginning of the winter offseason before they return to the action in February to prep for the Lone Star Conference Championships in April. The full 2022 spring schedule will be released later this year.