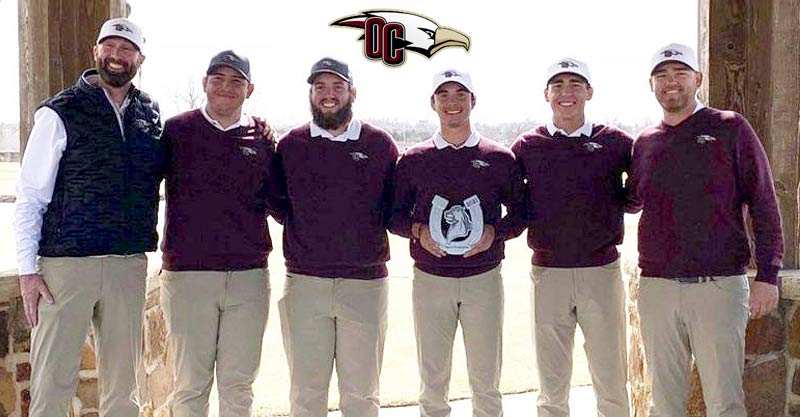 EDMOND, Okla. (March 16, 2021) – It wasn’t without a few worrisome moments in the middle of the round, but eventually, Oklahoma Christian’s men’s golf team found itself Tuesday afternoon at the top of the leaderboard.

Paced by top-five showings by Trevor Norby and Mateo Pulcini, the 18th-ranked Eagles held on to win the Broncho Invitational on Oak Tree Country Club’s East Course over a deep field that included four other ranked opponents and local rival Central Oklahoma.

It was the Eagles’ third win this season in five tournaments against NCAA Division II competition, and they finished second in one of those other two events.

The Eagles entered the round up six shots on UCO and eight on Washburn, but Washburn – led by medalist Andrew Beckler, who posted a 2-under-par 68 – briefly moved ahead of OC and UCO before the Eagles and Bronchos reasserted themselves.

Norby, a senior from Carlsbad, Calif., who won the 2019 Broncho Invitational, entered the day with a one-shot lead over Beckler. Norby closed with a 74 and a three-round score of 209 (1-under-par) and finished five shots behind Beckler, but ahead of everyone else in the 104-man field.

Pulcini, a freshman from Rio Cuarto, Argentina, made a late move up the leaderboard to fifth place, recording five birdies over his final 13 holes on the 7,126-yard course. His 71 left him at 216 overall for the tournament.

OC sophomore Alejandro Armijo of Rio Rancho, N.M., also posted a 71 on Tuesday and finished tied for 13th at 220. Junior Andres Brictson of Merida, Mexico, tied for 38th at 226 after a final-round 75 and junior Alex Motes of Sulphur Springs, Texas, tied for 74th at 236 after a 77.

OC also fielded a B team in the tournament, played on a course on which the Eagles often practice. The top finisher from that squad was freshman Ransen Turner of Edmond, Okla., who shot a 74 on Tuesday and tied for 81st at 239. Freshmen Said Powers and Chase Gardner and sophomore Hunter Perkins each shot a 76 while freshman Mason Bannister posted a 78.

The Eagles will compete in their third tournament in as many weeks next Monday and Tuesday, the Lion Invitational, hosted by Texas A&M-Commerce at Trophy Club Country Club in Trophy Club, Texas.

The Bronchos closed with a 290 to finish three trips around the East Course with an 876 total. Central’s “B” team unit came in 14th with a 911 total.

Carson Tewell had the low round for the varsity with an even-par 70, while Cavdar closed with a 71 and Caleb Kimmel a 72. Evan Griffith added a 77 and Jacob Lackey shot 79.

Ethan Galvan paced UCO’s second unit, firing a sizzling four-under 66 for the low round of the final day.

Cavdar ended up tied for eighth in the individual standings with a 218 total and Kimmel was 13th at 220. Galvan and Peyton Knell tied for 10th with 219 totals for the second team.

“The course played really tough,” head coach Josh Fosdick said. “I’m proud of the way our guys fought and battled in trying to defend their home course. It was a really strong field and to finish second we had to beat a lot of good teams.

“And I can’t say enough about the B team that came out and beat some good college teams.”

Galvan eagled the par-5 fourth hole and added four birdies while making just a pair of bogeys in his 66.

Tewell offset three bogeys with three birdies in his even-par round, Cavdar bogeyed two of his first three holes before playing the last 14 one-under and Kimmel was one-under on his last 11 holes.

Central is back in action next week, traveling to Viera, Fla. for the Space Coast Collegiate Championship.