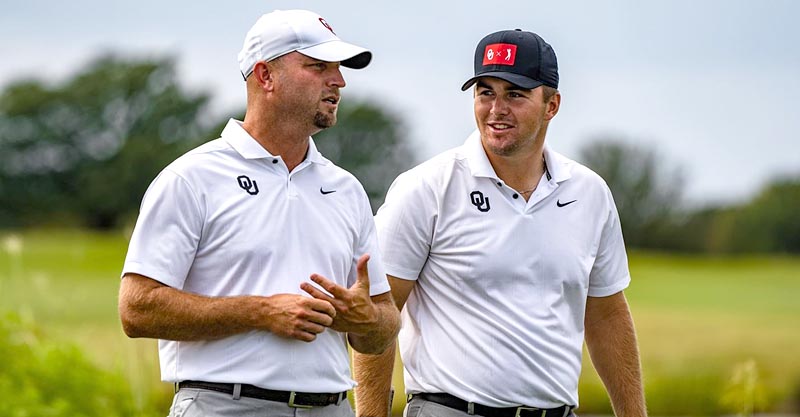 CARROLLTON, Texas — The Oklahoma men’s golf team tallied seven birdies and just two bogeys on the front nine, powering it to a 292 (+4) in the second round of the Maridoe Collegiate Invitational Tuesday.

The Sooners (3rd, +4) entered Tuesday’s round with a slim lead over the 15-team field but will need to close ground in the final round of the 54-hole tournament Wednesday as they now trail leader No. 3 Arizona State by four shots. Oklahoma holds third place at the event with a seven-shot lead over fourth-place Liberty and will play in Wednesday’s final group with the Sun Devils (1st, E) and No. 5 Texas (2nd, +2).

“The wind popped up on us over on 13 and we struggled through some adversity with our finish,” head coach Ryan Hybl said after the round. “We didn’t do a great job coming down the stretch today, but we are learning. We are still right where we need to be with an opportunity tomorrow. I know that our guys will be ready for their moment.”

Chris Gotterup (T5, -2) continued his strong play Tuesday, matching Patrick Welch for the team’s lowest round of the day by firing an even-par 72. The transfer shares fifth at the prestigious event and will look to clinch the eighth top-five finish of his career.

Welch (T12, +2) was steady for the Sooners for 15 holes, playing Maridoe Golf Club with a clean card thru 15 paired with three birdies before putting bogeys on the card for the final three holes. The senior’s even-par 72 gives him a share of 12th entering Wednesday’s final round.

Freshman Drew Goodman (T12, +2) joins Welch and Gotterup inside the top 15 on the leaderboard after posting a 1-over 73 Tuesday. The Norman, Okla., product was in the red heading into the final two holes of the day, but bogeys on 17 and 18 moved him back over par.

Logan McAllister (23rd, +4) opened his round with a birdie on the first hole before sinking pars on the rest of the front nine, but a double bogey on No. 10 paired with two more bogeys to finish gave the All-American a second-round score of 75 (+3).

The Sooners will look to claim the 29th win of the Hybl era Wednesday and are in line for the 39th top-three finish in the last four seasons, marking the best stretch in program history.

Campbell Jr. will tee things off for OU Wednesday at noon with the rest of the team teeing off in 10-minute increments with the leaders going out at 12:40 p.m. CT. Live scoring can be found on Golfstat, and Golf Channel will carry the event’s finale from 3-6 p.m. CT.