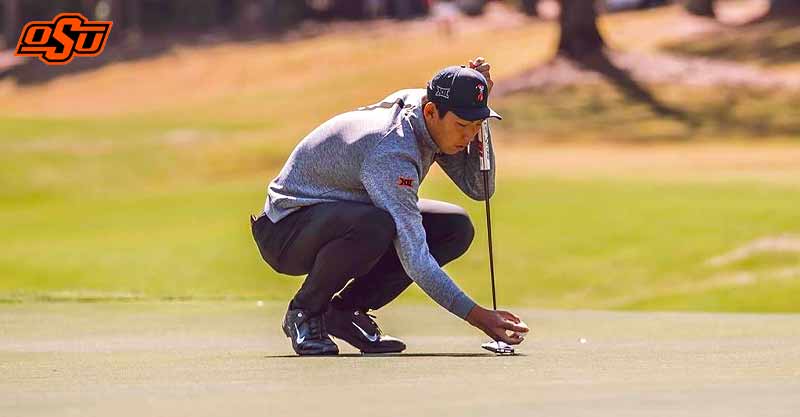 • Oklahoma State’s men’s golf team will look to add to its NCAA-best total of 15 regional titles when it begins play at the NCAA Columbus Regional on Monday.

• The Cowboys will be the top seed in the field and will be looking to advance to Grayhawk Golf Club for the NCAA Championship, which will be contested May 27-June 1.

• Seniors Eugenio Chacarra and Aman Gupta as well as junior Brian Stark and sophomores Jonas Baumgartner and Bo Jin comprise the lineup. Senior Rasmus Neergaard-Petersen will be the substitute.

• The Cowboys will begin their first round at 7:30 a.m. (EST) and will be grouped with Georgia Tech and Arkansas.

• The 54-hole event will be contested Monday through Wednesday at the Scarlet Course (par 71, 7,422 yards) in Columbus, Ohio.

• The Cowboys have 15 NCAA regional titles to their credit, which are six more than any other team in the country.

• The Cowboys have won five consecutive regionals after their victory last season on their home course, Karsten Creek.

• The Cowboys, who have advanced to the NCAA Championship 73 of a possible 74 times, also have 11 regional medalists overall with the most recent being Kristoffer Ventura in 2016 in Stillwater.

• The Scarlet Course has been a home away from home of sorts for the Cowboys. OSU has competed in five regionals at the famed layout. OSU owns victories in 1990 and 2018.

• Bo Jin earned a runner-up finish last season as a freshman at Karsten Creek, while Aman Gupta tied for 14th place. Jonas Baumgartner played the first round before Brian Stark substituted in and played the final 36 holes.

• As a member of the Wake Forest squad in 2019, Eugenio Chacarra tied for sixth place at the NCAA Myrtle Beach Regional. Last year he shared third place at Karsten Creek.

• The Cowboys are ranked second in both the Golfweek/Sagarin Ranking and the Golfstat ranking.

• OSU head coach Alan Bratton competed at the 1993 regional and was an integral part of the Cowboys’ 1995 national championship squad, which took down Stanford in a playoff.

• Bratton captured an individual regional title of his own in 1995.

• Former Cowboy Kevin Tway became the first-ever player to win three regional titles with his victories in 2008, 2009 and 2011.