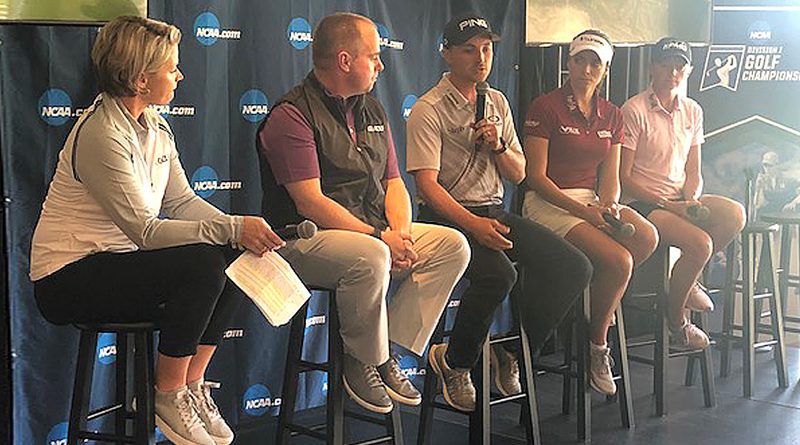 For the second consecutive year, Oklahoma State’s elite golf program will be in the spotlight on the docu-series Driven, this time sharing the spotlight with 2018 NCAA runner-up Alabama and its in-state rival Auburn.

The Driven series, again with Rickie Fowler as a co-producer this time with fellow PGA Tour star Justin Thomas, will premiere on Golf Channel on May 6 at 8 p.m. CDT.

Any Oklahoma State or Oklahoma fans planning to attend, note that Blessings owner John Tyson and his family foundation are underwriting the cost of tickets, so there will be no charge for entry. Parking will be near the course.

Also announced Tuesday was that the winner of the women’s championship will receive a sponsor exemption into the LPGA’s Northwest Arkansas Championship June 24-30 at Pinnacle Country Club in Rogers.

With Tyson looking on, all heaped praise on the course as a spectacular site for the men and women. Golf Oklahoma toured the course with General Manager Richard Cromwell following the conference to see the many changes that have been made in the past two years, including five new greens, a new first hole and a new routing that shortened the walk by more than a mile.

The old tricky downhill first hole has been transformed into a practice area, just adding to what is probably the finest indoor and outdoor practice facilities enjoyed by any college. Now the first tee is just left of the 18th green and the two holes share a fairway, which will require a good traffic cop during the tournament.

The first hole is a dogleg right requiring a massive but precisely placed tee shot in order to not be blocked out by the trees on the right. Too far left and the ball goes down into a hazard. Starting with a bogey will be a relief to many.

What used to be the par-5 second hole is now No. 15 and the old par-5 fourth hole is now No. 2. From there the holes are in much the same sequence until 15 (old two). No. 16 used to be No. 3 and 17, which formerly teed off from a cliff, now approaches from a lower angle but the green is narrow and angled with sharp drop-offs leading to trouble on all sides.

Karsten Creek, where the Cowboys romped to victory in 2018, is a severe test of golf, but it’s hard to imagine scores not being significantly higher at The Blessings. There are very few tee shots where the proper line is clear and the penalties for picking the wrong angle or missing a green are significant. The Razorbacks should have a huge home course advantage assuming the men’s and women’s teams advance through regional play.

The course plays to a par of 72 for the men (73 for the women’s championship) though two of the former par-5 holes have been turned into long par-4s. The sixth hole used to be a long downhill par-3, now it’s a short par-4 with a risk-reward element. Go for the green and either hit it or be in trouble. The only layup is to punch it right into the fairway of the adjoining par-5 fifth hole.

Members have been essentially playing off portable mats for the entire 2019 season so the course is pristine. No doubt it will be beautiful but incredibly demanding. College golfers are so good today that what looks daunting to most observers is overcome with 320-yard drives and laser-like irons. But anyone slightly off on controlling their ball will find The Blessings hard pressed to live up to its name.