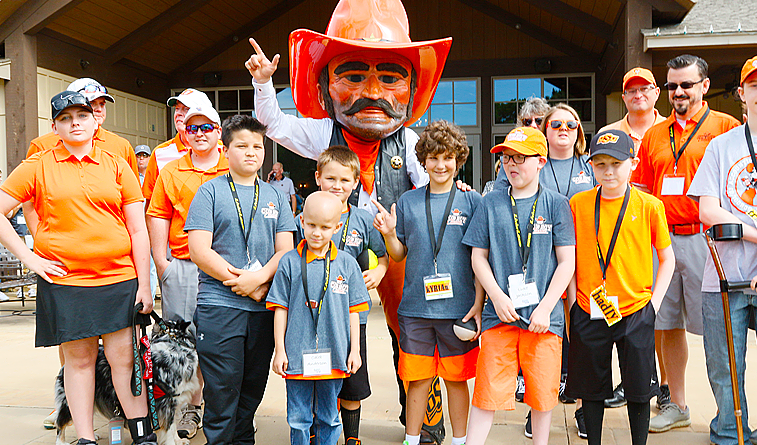 STILLWATER, Okla. – Oklahoma State remains heavily involved in Coaches vs. Cancer fundraising efforts, a cause the school and its coaches helped get off the ground back in 1993.

OSU has raised the bar on fundraising in recent years, and looks to again May 14 when it hosts the Fourth Annual Coaches vs. Cancer Cowboy Celebrity Golf Classic at Stillwater Country Club.

The event is sold out, with a record 27 teams committed to play in the 18-hole tournament. Sponsorships remain available and anyone wishing to donate to this ongoing quest to fight cancer can do so online at www.osucvcgolf.org.

Eddie Sutton was there at the beginning with Coaches Vs. Cancer, as the legendary Cowboys coach teamed with his friend and former Missouri coach Norm Stewart, who invited him to join the program. OSU coaches have followed, with Mike Boynton the latest to embrace the cause.

“I’m proud to partner with Coaches vs Cancer in the fight against this terrible disease,” Boynton said. “I don’t know anyone who hasn’t been affected in some way by cancer, and it’s through great events like the OSU Coaches vs Cancer Cowboy Classic Golf Tournament that we bring much needed awareness and funds to the fight. I encourage everyone to get signed up, volunteer or get involved in helping this great organization.”

All dollars raised stay in the state of Oklahoma and are used to fund research, patient services, and education. Last year, the golf tournament raised over $90,000 for the fight against cancer.

Oklahoma State consistently ranks among the top 10 nationally and leads the Big 12 Conference in dollars raised.

The program also hosts children impacted by cancer at OSU sporting events throughout the year, and some of the children and their families will be present May 14.

“It’s been amazing to see the support that we’ve received for this event,” said Dave Hunziker, voice of the Cowboys and spokesperson for the OSU Coaches vs. Cancer campaign. “We’ve had an incredible response from teams, celebrities, sponsors and volunteers. I think when people come to the event and see the kids who have battled cancer, and can see their faces and hear their stories, it has quite an impact.”

The golf tournament was the idea of OSU Coaches vs. Cancer committee member Matt Allen, who was diagnosed with brain cancer in 2009.  Matt was not able to see the tournament come to fruition as he passed away on Dec. 24, 2013, just months before the first tournament. Allen’s motto “Play Hard and Have Fun” is a central theme of the tournament.

The executive committee maintains that motto still and his family continues to be involved, presenting two “Superman” Awards (Allen’s favorite superhero) at the conclusion of the day – one in memory and one in honor. The award is presented to a cancer survivor who exhibits the same qualities his family found so endearing in Allen. This year’s winners are Lori Johnson (in memory) and Dr. Don Herrmann (in honor).

For information on sponsorship opportunities or other ways to donate, visit www.osucvcgolf.org.