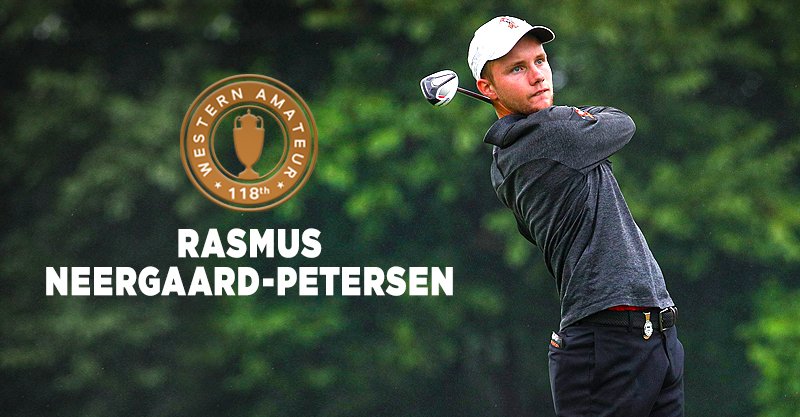 CARMEL, Ind. (August 1, 2020) – Pierceson Coody, of Plano, Texas, birdied the first hole of the final match at the 118th Western Amateur on Saturday and never looked back while winning the George R. Thorne Trophy at Crooked Stick Golf Club.

The 20-year-old Coody, a junior at Texas, closed out 21-year-old Rasmus Neergaard-Petersen, of Copenhagen, Denmark, with a par on No. 17 for a 2-and-1 victory. Coody’s tee shot on the par-3 17th found the right rough, but he sank a 20-footer to put the pressure on Neergaard-Petersen, who missed his 5-foot par putt.

“That’s match play,” Coody said. “His putt became a lot longer and a lot harder. He knew if he missed, it’s the end of the game.”

Coody, the 16th-ranked player in the World Amateur Golf Rankings, called the win the biggest of his career. His other top victory came at the 2019 Trans-Miss Amateur. Coody is the grandson of Charles Coody, the 1971 Masters champion.

“It’s definitely a steppingstone, and it feels so good,” he said. “It was such a tough test. The pins in the afternoon were absolutely brutal. The course is so punishing if you miss it in the wrong spots. But I had a lot of consistent play. That was the key.”

Although he led from start to finish, Coody’s biggest lead was just 2 up, first following a par at No. 6 and then after a par at No. 14. Neergaard-Petersen, a junior at Oklahoma State and the 194th-ranked player, won No. 16 with a par to cut the lead to 1 up. But he three-putted the 17th for a bogey to lose, and he made only one birdie in the final.

“I didn’t really hit it that close, but I had a lot of good looks,” he said. “It seemed to me like my putts wouldn’t drop. I started gaining momentum at the turn, but I hit a couple of bad shots that really hurt me.”

Neergaard-Petersen upset Ricky Castillo, of Yorba Linda, California, in a 21-hole semifinal match Saturday morning. He led 3 up after the first nine, but Castillo, a sophomore at Florida and the No. 2 amateur in the world, rallied to send the match into extra holes.

“It was a great week, and my game is trending in the right direction,” Neergaard-Petersen said. “Making it to match play was the goal. Making it to the final was really nice.”

Coody beat George Duangmanee, of Fairfax, Virginia, a freshman at Virginia, 1 up in the semis. He trailed Duangmanee, the 208th-ranked player, through 14 before tying the match with an eagle at the par-5 15th. He went ahead for good with a par on 16.

Coody became the seventh Texas Longhorn to win the Western Amateur, following in the footsteps of major champions Ben Crenshaw and Justin Leonard. The most recent champion from Texas was Cole Hammer, of Houston, Texas, who won at Sunset Ridge Country Club in Northfield, Illinois, in 2018. Hammer and Pierceson roomed together as teammates at Texas.

Neergaard-Petersen, who won the 2018 and 2019 German International Amateur, was the first Dane to qualify for the Sweet 16 since Sebastian Cappelen did it in 2013 at The Alotian Club in Roland, Arkansas.

This was the first time since 1951 that one of the world’s oldest and most storied amateur golf championships was played in the state of Indiana. South Bend Country Club hosted that year’s Western Amateur, which was won by famed golfer Frank Stranahan. The Western Amateur had never been played in the Indianapolis area.

Crooked Stick also has been a supporter of the Evans Scholars Foundation, a nonprofit established by the Western Golf Association that has awarded full tuition and housing college scholarships to more than 11,000 caddies since 1930.

Twenty-four of those caddies were from Crooked Stick, including Joe Conway, who is currently enrolled at Purdue University.