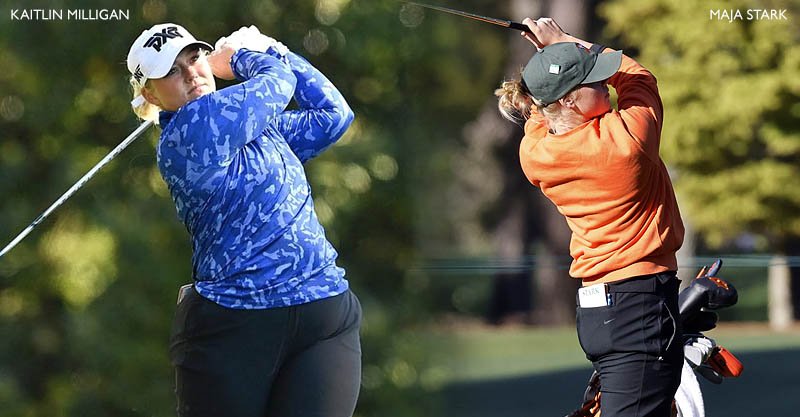 AUGUSTA, Ga. –Oklahoma State’s Maja Stark, a native of Sweden, shot a 3-under 69 Saturday to move from 30th to a tie for 10th in the Augusta National Women’s Amateur. It was the best round shot by the 30 contestants in the field, which she was the final entry after winning a playoff with six others by rolling in an 18-foot birdie putt on the first hole.

Oklahoma senior Kaitlin Milligan shot 76 to finish in a tie for 19th. The tournament showcased the most elite field in women’s amateur golf, featuring 82 of the top golfers worldwide.

“This week was like a dream,” Milligan said. “To be walking the same fairways as some of my idols is a feeling unlike any other. It was a completely different kind of golf, and I’m so grateful for this opportunity because it was the opportunity of a lifetime.”

The Norman product opened her day at the home of The Masters with four-straight pars before bogeying the par-four No. 5 that plays iconically long. After sinking another par on the sixth hole, she bogeyed seven and eight. Milligan went on to bogey the 10th before tallying five more pars to move her back up the leaderboard and into the top 20.

Her round’s highlight came on 17 when she hit a solid tee shot to give herself a good angle to the pin. A robust approach onto the green left her with a putt that she finally got to fall for her first birdie of the day.

“I’d been overthinking things all day,” Milligan said. “I hit a great wedge in and didn’t overthink the putt and finally got one to fall. It was honestly such a sigh of relief, I wanted to make some birds today, so it felt amazing to birdie a hole at August National.”

“This was one of the most unbelievable events I’ve attended,” head coach Veronique Drouin-Luttrell said. “I’m so proud of the strides our program has made, as well as Julienne (Soo) and Kaitlin for being the first two players to represent our team in back-to-back years, and I can’t wait for more Sooners to play in the future.”

Milligan and Soo are two of Oklahoma’s most prolific golfers, ranking inside the program’s top four all-time in scoring average.

“Milligan now rejoins the team in Norman as they prepare to conclude the regular season with a match-play event in Stillwater, Okla., versus Oklahoma State, Texas Tech and Tulsa on April 11-12 before entering the postseason on April 18 at the Big 12 Championship.