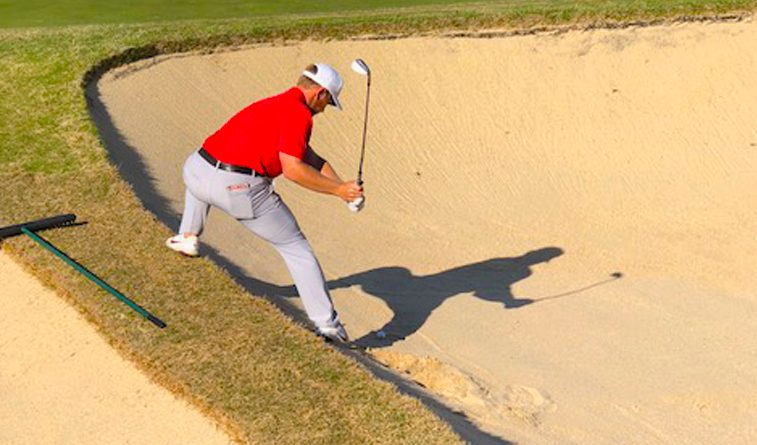 TULSA – In the raw morning, guarded by a north wind gusting over 20 mph, venerable Southern Hills Country Club taught the best of the Big 12 Conference golfers some respect.

It let down its guard in the afternoon, as tees were moved up some 600 yards, the temperatures warmed into the 70s and the breeze waned. The scores reflected the tale of two courses, as the 10 teams combined to shoot a collective 105 shots lower in the second round.

Oklahoma, thanks to a closing flurry of birdies by Grant Hirschman and Quade Cummins, who each shot 3-under 67, improved by 17 shots over its morning round (294-277), to pull within two shots of surprise leader Iowa State at the halfway point of the Big 12 Conference Championship.

The top-ranked Cowboys were 16 shots better in the afternoon. No. 1 player Viktor Hovland fired a 66 that included a hole out eagle from 106 yards on the par-4 12th, while freshman Matthew Wolff improved from 76 to 69.

The Sooners shot a 3-under 277 and are at 571, while OSU is three shots back at 574. OU will be paired with Iowa State in the third round while the Cowboys will match up with Texas and its stars Doug Ghim and Scottie Scheffler.

Sooners coach Ryan Hybl said at the midway point of the second round that if his team didn’t get it going, the Sooners would find themselves in a difficult spot. Hirschman birdied four of his final six holes, while Cummins added another three birdies over that stretch.

“These guys are tough and never give up,” Hybl said. “We were all over the place in the first round this morning, but we’ve had slow starts all year. Grant and Quade really led the way down the stretch and put us back in contention.”

OSU coach Alan Bratton lectured his team about the fundamentals of playing Southern Hills after the 14-over first round, reminding them to keep the ball below the hole, go for the middle of greens if the lie is at all risky and take bogeys and worse out of play.

“Our guys haven’t played the golf course much and it took a while to get adjusted,” Bratton said. “Southern Hills is hard and it took a while. But I like the changes I saw in the afternoon. They baited you with some of the tees and the pins were in tight landing areas.

“Victor is a tough competitor,” Bratton said. “He got off to a slow start but really brought it back. You have to manage this course and if you do you can shoot a round like that.

“I think everybody played better in the afternoon. I followed Matthew and he had 12 good looks at birdie. We’ve got to just keep adjusting to what’s out there. This is a wonderful place and a real treat for all the teams to play here.”

Iowa State’s Frank Lindwall made seven birdies in his afternoon round of 65, the best of the tournament this far, to help the Cyclones shoot 2-under as a team in the second round and forge a two-shot lead over the Sooners.