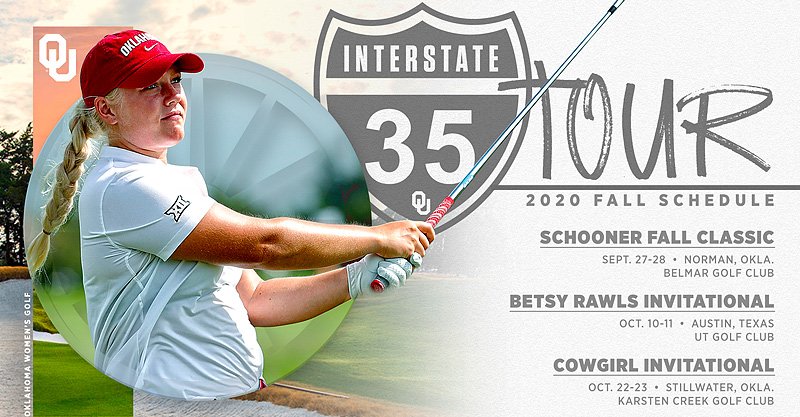 The Sooners will participate in three events this fall along the I-35 corridor, including the eighth-annual Schooner Fall Classic that they will host in Norman.

“We are so grateful to be able to compete this fall,” Drouin-Luttrell said. “Looking back at what happened in March, our season was cut short and now we’re doing everything in our control to ensure we get to play this fall. We’re excited to have the opportunity to compete and we can’t wait to get out on the course for our first event.”

Oklahoma opens its fall slate at Belmar Golf Club in Norman on Sept. 27-28 at the Schooner Fall Classic. The 54-hole event will welcome a talented field of teams from across the region.

The Sooners will conclude their fall schedule with an appearance at the Cowgirl Invitational at Karsten Creek Golf Club in Stillwater, Okla., on Oct. 22-23. OU’s most recent appearance in the event came in 1985, when the Sooners took home the tournament title.

The 2020-21 season marks Oklahoma’s 12th year under head coach Drouin-Luttrell, who has turned the program into one of the nation’s strongest. OU’s 10 lowest season scoring averages come under the Quebec native, and the Sooners have taken home a pair of Big 12 championships in her tenure.

OU returns all but one golfer from its 2019-20 team that finished No. 28 in Golfstat’s final rankings. The Sooners add Houston transfer and 2019 All-AAC golfer Hannah Screen, as well as two freshmen. The team’s returning golfers have played a combined 247 rounds for the Crimson and Cream.

Oklahoma’s spring schedule will be announced at a later date.